The controversial mayor of Toronto, Rob Ford has told a Canadian newspaper he will take temporary leave to seek help for his substance abuse problem. 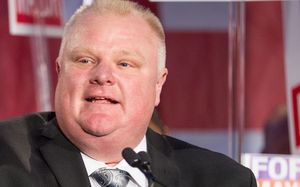 Mr Ford's decision comes after The Toronto Sun obtained an audio recording of him apparently making offensive comments about other politicians in a local bar.

His lawyer Dennis Morris said his client acknowledged he had an abuse problem and wanted to do something about it.

Last year Mr Ford admitted, after months of denials, smoking crack cocaine while drunk but rejected calls to stand down until now.

He had been stripped of many of his powers after the admission but was still seeking re-election in October.

The newspaper quoted Mr Ford as saying he is "ready to take a break" from the election campaign to "go get help."

Videos have emerged in recent months showing him ranting obscenely in an apparently intoxicated state.

Mr Ford was first elected in 2010 to lead Canada's largest city on a pledge to tackle wasteful spending at city hall. He draws much of his support from the suburban areas of Toronto.