The Pentagon said on Friday that Russian warplanes violated Ukraine's airspace several times in the past 24 hours.

A spokesman told the BBC on Friday that the incidents had happened mainly near the border with Russia, but gave no further details. 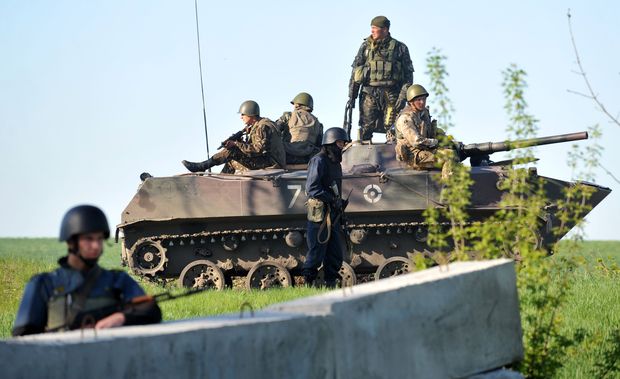 Ukrainian forces at a checkpoint near the eastern city of Slavyansk. Photo: AFP

NATO estimates the Kremlin has up to 40,000 troops along Ukraine's border.

And the interim government in Kiev said pro-Russian separatists in Slaviansk have seized a bus carrying 13 international observers from the Organisation for Security and Cooperation in Europe.

The observers are part of a German mission linked to the OSCE, but are not part of the official group agreed to by Russia.

Kiev said negotiations were going on for the release of the group.

Earlier, Prime Minister Arseny Yatseniuk accused Russia of wanting to start World War III by occupying Ukraine "militarily and politically" and creating a conflict that would spread to the rest of Europe.

He told the interim cabinet in Kiev the world has not yet forgotten World War II, but Russia already wants to start World War II.

Meanwhile, Russian Foreign Minister Sergei Lavrov has denounced security operations by Kiev in eastern Ukraine as a "bloody crime" and said the interim government would face justice for staging a war against its own citizens.

On Thursday raids by Ukrainian commandos on pro-Russian checkpoints around the town of Sloviansk left at least two separatists dead.

Russia, Ukraine, the EU and the United States agreed in Geneva on 17 April that the separatists should leave official premises they have occupied in a dozen eastern towns since 6 April, and give up their arms. The pact included an amnesty for those agreeing to retreat peacefully.

Ukraine has been in crisis since President Viktor Yanukovych was deposed in February. Russia then annexed the Crimean peninsula after a referendum on 16 March.

The Group of Seven countries threatened on Friday to impose new sanctions on Russia over its actions in Ukraine.

After a phone call to President Vladmir Putin and a conference call with other European leaders, Chancellor Angela Merkel of Germany said European Union foreign ministers would meet again to consider toughening the sanctions on Russia.

She said Moscow could do more to ease the tension in eastern Ukraine.

Sanctions are already in place against certain Russian individuals and institutions. Further sanctions are expected to target specific sectors of the Russian economy.

Russian officials say a water shortage in Crimea is threatening to become acute as Ukraine has reduced the supply via a canal.

Ukraine does not recognise the new authorities in Crimea who are backed by Moscow. Russia annexed the territory after a referendum on 16 March.

Officials say the harvest of grapes, rice, maize and soya will be ruined if Crimea does not get more water soon.

The North Crimea Canal delivers water to Crimea from the River Dnieper, in the southern Kherson region of Ukraine. The BBC reports the canal accounts for 80% of Crimea's water.

State media report that Moscow plans to establish permanent checkpoints there, as well as new rules for entering or leaving Crimea.