The Marshall Islands is taking on the world's nuclear powers and is suing them for violation of international law. 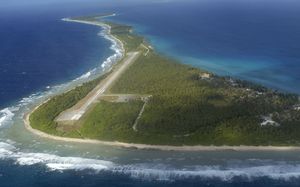 The Marshall Islands were used for massive nuclear tests by the United States in the 1950s.

It's suing the US and the other eight nuclear armed countries, accusing them of failing in their obligation to negotiate nuclear disarmament as required by the 1968 Nuclear Non-Proliferation Treaty.

It has lodged the case at the International Court of Justice in The Hague and one suit specifically directed against the United States has been lodged in the Federal District Court in San Francisco.

The Marshall Islands, a grouping of 31 atolls, was occupied by Allied forces in 1944 and placed under US administration in 1947.

Between 1946 and 1958, the United States conducted repeated tests of hydrogen and atomic bombs in the islands.

The Nuclear Age Peace Foundation said the countries named in the suit were the United States, Russia, Britain, France and China as well as Israel, India, Pakistan and North Korea.