Australian authorities do not believe material found on a Western Australia beach is connected to the missing Malaysia Airlines plane.

A large metallic object was found by a member of the public on a beach at Augusta south of Perth on Wednesday. 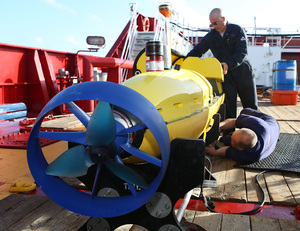 An unmanned submersible, based on an Australian Navy ship, is being used in the search. Photo: AAP / AUSTRALIAN DEFENCE

Photos were sent to the Australian Transport Safety Bureau for examination.

Bureau spokesman Martin Dolan ruled out any link with flight MH370 and said the office was satisfied it was not a lead.

However, Mr Dolan encouraged people to continue coming forward with any other discoveries.

"We want to pursue everything. There are going to be a range of cases where something that looks positive turns out not to be on closer examination."

The search continues for wreckage from the Boeing 777, which vanished on 8 March carrying 239 people. The search area is about 50,000 square kilometres and situated about 1,500 kilometres north-west of Perth.