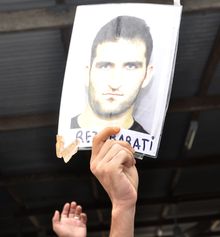 The video obtained by Fairfax media appears to contradict statements made by Papua New Guinea and Australian authorities following the death of Reza Berati after two nights of clashes in February this year, Radio New Zealand International reports.

The morning after the violence, Australia's Immigration Minister Scott Morrison said security firm G4S had used personal protection gear, but that no batons or other weapons were used.

But the Fairfax footage clearly shows G4S guards throwing stones and other objects at asylum-seekers trying to hide in the compound. There are also images that show no action was taken to isolate the scene of Mr Berati's killing before evidence was ever compromised or completely cleared away.

Other images show bullet holes at stomach level, which challenges the assertion that only warning shots were fired in the air by police.

Nauru has been accused by a United Nations official of breaching its international obligations by failing to set up an independent body to investigate torture and human rights abuses in the Australian-run detention centre on the island.

Nauru ratified a UN anti-torture convention last year, but has not fulfilled its commitments, according to a Fairfax report.

The chairperson of the UN's sub-committee on prevention of torture, Malcolm Evans, says all member states are required to establish independent bodies for overseeing their detention centres.