Pro-Russian activists in eastern Ukraine have added their own conditions to an international deal stipulating they must leave all occupied buildings and lay down their arms. 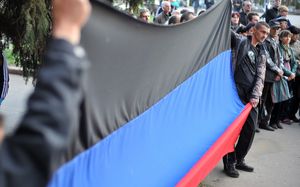 A flag of the 'Donetsk republic' is displayed outside a regional state building. Photo: AFP

Interim prime minister Arseniy Yatsenyuk has urged them to lay down their arms.

But protest leaders in the city of Donetsk say the acting government and president in Kiev will have to step down first because they took power in an illegal coup.

Spokesman Alexander Gnezdilov said his group would evacuate the government building in the city only when the "illegal" Kiev government vacated parliament.

Another protest leader said they would not leave unless pro-European Union demonstrators in Maidan Square in Kiev pack up their camp first.

"We cannot accept the values of the Kiev junta, we have our heroic past going back to World War II, we are the Russian bear which is waking up," a statement said.

"Don't worry, everything will stay peaceful and orderly,'' it added. ''The only problem is if the Kiev junta want war."

The BBC reports their demands are supported by Russia.

In Geneva on Thursday, Russia, Ukraine, the European Union and the United States agreed that illegal military groups in Ukraine must leave official buildings and that there should be an amnesty for anti-government protesters.

The BBC reports Ukraine has been in crisis since President Viktor Yanukovych was toppled in February. Russia then annexed the Crimean peninsula after a referendum on 16 March.