Divers searching for survivors of the capsized South Korean ferry have seen three bodies floating in a submerged passenger cabin but were unable to break through a window to retrieve them.

The vessel is now completely underwater, and strong currents and poor visibility continue to thwart the search effort.

The Sewol was travelling from Incheon to Jeju, a resort island in the south on Wednesday morning when it capsized and sank within two hours. 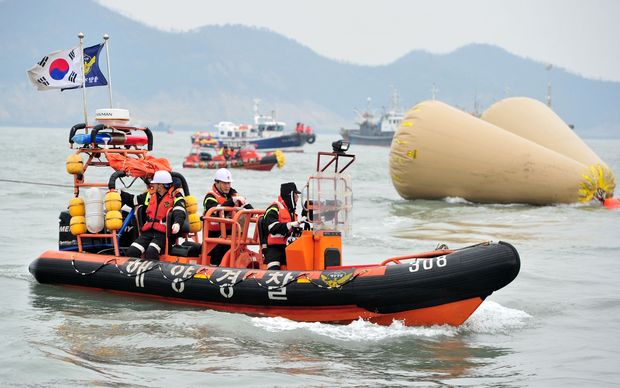 Efforts to find the 268 people still missing have bee hampered by low visibility and strong currents and hopes are fading for them. Most of them are pupils from Danwon High School in Ansan, a suburb of Seoul.

The BBC reports 28 people now known to have died in the disaster and 179 have been rescued.

The Yonhap news agency reports the captain of Sewol is under arrest.

The agency said Lee Joon-seok faced charges including negligence of duty and violation of maritime law.

Yonhap said a court had issued arrest warrants for him and two other crew members on these charges.

Captain Lee, 52, was shown on television on Thursday, his face partially obscured, apologising to the dead and their relatives.

"I am really sorry and deeply ashamed. I don't know what to say," he said.

It has since been learned that a junior officer - not the captain - was at the helm of the ferry when it capsized.

Relatives and friends of the students have also gathered at Danwon High School in the commuter town of Ansan.

The vice-principal of the school, Kang Min-gyu, who was one of those rescued, hanged himself outside the gym in Jindo on Friday.

Police have released part of a two-page suicide note that reads: "Burn my body and scatter my ashes at the site of the sunken ferry. Perhaps I can become a teacher for the missing students in my next life".

The BBC reports investigations are focusing on a sharp turn the vessel took before it started listing and whether an evacuation order could have saved lives.

Three salvage cranes have reached the scene and may be used to raise the ship or move it to another area with weaker currents.