A citrus disease spread by an insect has hit Florida's orange crop, which is expected to be the worst in nearly 30 years. 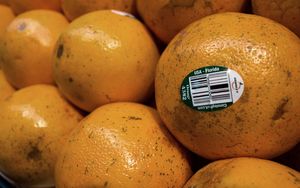 The Asian citrus psyllid, which infects citrus trees with huanglongbing, or citrus greening disease, which causes fruit to taste bitter and fall from trees too soon.

Latest figures, published by the US Department of Agriculture predict production of 110 million boxes of fruit, or about five million tonnes.

AFP reports that is 18 percent less than 2013, and the lowest since 1985, when citrus groves were hit by a deep freeze. It is also far from the record 244 million boxes collected in 1998.

Juice prices rose in New York markets after the release of the USDA figures. The price of frozen concentrated orange juice rose to its highest point on the Intercontinental Exchange in New York since March 2012.

Juice for May delivery rose seven percent in three trading sessions to $US1.67 per pound. The price has also been driven by drought in Brazil.

Some small growers have practically abandoned their trees, as the rise in prices will not make up for their production shortfalls.

The citrus industry generates $US9 billion a year in Florida and employs 76,000 people.