At least 12 Nepalese climbing guides have been killed and five others are missing after an avalanche struck Mount Everest.

It's believed to be the deadliest single accident in the history of modern mountaineering on the world's highest peak. Nine bodies have been recovered and seven people have been rescued. 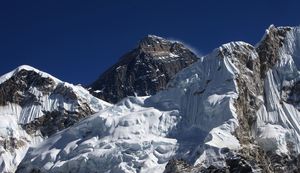 The avalanche struck about 6.45am (local time) on Friday at an altitude of about 5800 metres in an area known as the "popcorn field" between base camp and camp 1 on the route into the treacherous Khumbu icefall.

It is the first avalanche of the climbing season, which begins later in April. Every year, hundreds of foreign and Nepali climbers flock to Everest in an attempt to climb its 8850-metre (29,035 feet) peak.

Kathmandu-based mountaineering expert Elizabeth Hawley told AFP the avalanche was the most deadly single accident in the history of modern mountaineering on the peak. In 1996, eight people from two expeditions were killed.

More than 4000 climbers have scaled the summit since it was first climbed by New Zealander Sir Edmund Hillary and Tenzing Norgay Sherpa in 1953, and over 300 have died.

The Ministry of Foreign Affairs said there is no indication that any New Zealanders have been involved. MFAT said the New Zealand Honorary Consul in Kathmandu is liaising with local authorities and base camp companies.

Nepal is home to eight of the world's 14 highest peaks. Everest is on the border between Nepal and the Chinese region of Tibet and can be climbed from both sides. The climbing season usually ends in late May when rainy season wind and cloud pushes up from the south to cloak the Himalayas, Reuters reports.