Russia, Ukraine and the West have reached a surprise deal aimed at easing the worst East-West crisis since the Cold War, but US leader Barack Obama says it is uncertain whether Moscow will stand by the agreement.

President Obama has cautiously welcomed the deal to calm tensions in Ukraine, reached at multi-party talks in Geneva on Thursday, but said the US and its allies were ready to impose new sanctions on Russia if the situation failed to improve. 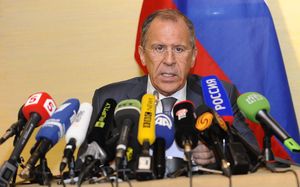 Ukraine has been in crisis since the toppling of its pro-Moscow president. Russia then annexed the Crimean peninsula after a referendum on 16 March.

President Vladimir Putin said he hoped he would not have to use his "right" to send Russian troops into its western neighbour, in what appeared to be a thinly veiled threat against Kiev. Mr Obama said there would be consequences if Russia does not keep its side of the bargain.

"All sides must refrain from any violence, intimidation or provocative actions," a joint statement issued after the Geneva talks said. "All illegal armed groups must be disarmed; all illegally seized buildings must be returned to legitimate owners; all illegally occupied streets, squares and other public places in Ukrainian cities and towns must be vacated."

Under the agreement there would be an amnesty for all anti-government protesters. These steps will be overseen by monitors from the Organization for Security and Co-operation in Europe.

Mr Lavrov said the crisis must be settled by Ukrainians themselves and there must be long-term constitutional reforms.

Meanwhile, armed pro-Russian separatists were still holding public buildings in eastern Ukraine on Friday, saying they needed more assurances about their security before they comply with an international deal ordering them to disarm.

On Thursday, Russian, Ukrainian, EU and US foreign ministers agreed that illegal military groups in Ukraine should leave places they have been occupying. Russia denies fomenting separatism in eastern and southern Ukraine.

In Slaviansk, leaders of the pro-Russian gunmen have been holding a meeting inside one of the buildings they seized, to decide how to respond to the Geneva agreement. Separatists remain in control of the city's main streets, searching cars at checkpoints, Reuters reports.