The robotic submarine launched to find debris from the missing Malaysia Airlines jet has aborted its first mission after only six hours.

The American submarine Bluefin-21 was launched over the site of the strongest signals picked up by an Australian Navy ship and had been expected to search for 16 hours on Tuesday. 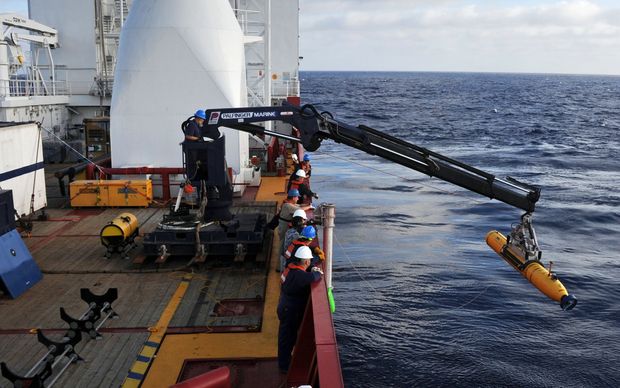 The Bluefin-21 searched for only six hours before being retrieved. Photo: AFP / US Navy

The Boeing 777 vanished en route from Kuala Lumpur to Beijing with 239 people on board on 8 March, with still no clue as to the cause of the disappearance. It is believed to have crashed in a remote part of the southern Indian Ocean.

The deep sea sub is designed to create a sonar map of the ocean floor and was deployed after sensitive listening equipment failed to establish contact with several underwater acoustic pulses that were consistent with an aircraft's black box flight recorders, the BBC reports.

However, the Bluefin 21 can only cover 40 square kilometres a day and is working at the very edge of its depth limit. Searchers warned on Monday it could be months or even years before anything is found.

US Navy Captain Mark Mathews told CNN the drone was set to stay 30 metres above the sea floor but slipped below the depth of 4500 metres of water at which it is allowed to operate.

The drone is due to be relaunched later on Tuesday if weather conditions far off Australia's west coast allow.