Supreme leader Ayatollah Ali Khamenei has warned Iran will never give up its nuclear programme. 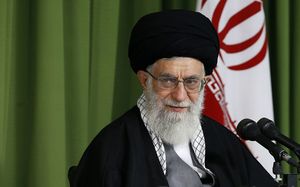 Iran and six world powers are working to agree a deal to replace an interim accord that expires in July.

Ayatollah Khamenei said Iran agreed to the talks to "break the hostile atmosphere" with the international community.

Britain, China, France, Germany, the United States and Russia want Iran to scale back its enrichment of uranium, which they fear could be used to make a nuclear bomb.

Tehran says its nuclear work is purely peaceful and hopes to agree a deal in return for a permanent lifting of sanctions.

Foreign Minister Javad Zarif said the two sides were up to 60 percent in agreement after latest talks in Vienna.

Ayatollah Khamenei told a gathering of nuclear scientists that Tehran agreed to the talks to show that it was not seeking nuclear weapons.

"These talks need to continue but all must know that despite continuation of the talks, activities of the Islamic Republic of Iran in the field of nuclear research and development won't be halted at all.

"None of the country's nuclear achievements can be stopped and no-one has the right to bargain over it," he said.