The leader of an Antarctic expedition that ended with a Russian research ship being stranded in sea ice has defended himself amid growing criticism.

The Akademik Shokalskiy left New Zealand on 28 November this year on a private expedition to commemorate the 100th anniversary of an Antarctic journey led by Australian explorer Douglas Mawson. 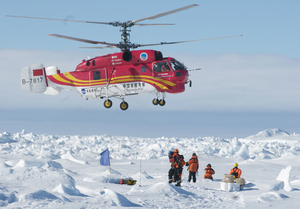 After completing their work, on Christmas Eve the ship got stuck after a blizzard pushed sea ice around it and had to make a distress call.

After three unsuccessful attempts by Chinese and Australian icebreakers the Xue Long and the Aurora Australis to reach the ship due to thick ice and poor weather, it was decided to airlift 52 passengers out on 2 January.

US Coast Guard icebreaker Polar Star is on its way to help the Akademik Shokalskiy and the Xue Long, which has also become are trapped.

Questions have been raised about the cost of evacuating the passengers. It is likely that millions have been spent on a international rescue mission which has affected the scientific programmes of a number of countries, the ABC reports.

Expedition leader Professor Chris Turney, from the University of New South Wales, has been criticised for inexperience and for taking a risk entering Commonwealth Bay.

However, writing for Britain's The Observer newspaper, he said the expedition wasn't a "jolly tourist trip", and represented serious science.

The trip inspired by Sir Douglas Mawson's expedition in 1911-1914 sought to investigate a number of issues in the region, including changes in seal and seabird populations.

Professor Turney said the amount of data collected throughout their trip "far exceeded" their expectations, but events unfolded which no amount of preparation could have mitigated.

"There was nothing to suggest this event was imminent. We have had regular updates on the state of the sea ice in the area and had been monitoring the region for the last year."

He said the expedition will be judged by peer-reviewed publications on the scientists' return.

The passengers are on board the Aurora Australis en route to Australia's Antarctic base Casey Station and are expected to sail to Hobart in Tasmania in a week's time.