A Chinese ship that went to the aid of a Russian research vessel stranded in Antarctic ice with 74 people on board is now having trouble getting out.

The Akademik Shokalskiy left New Zealand on 28 November this year on a private expedition to commemorate the 100th anniversary of an Antarctic journey led by Australian explorer Douglas Mawson. On Christmas Eve it got stuck after a blizzard pushed sea ice around the ship, freezing it in place, and made a distress call. 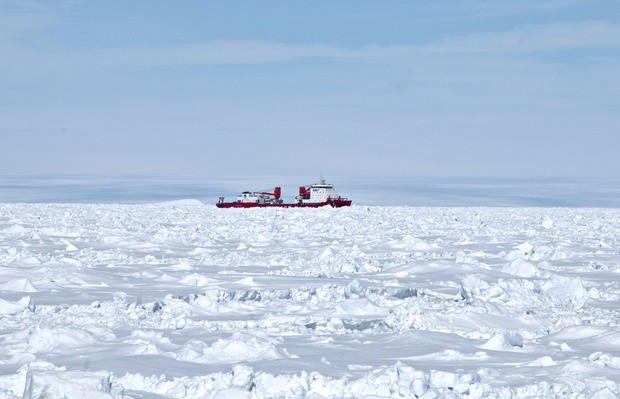 The Australian Maritime Safety Authority coordinated the rescue mission. After three unsuccessful attempts by Chinese and Australian vessels to reach the ship due to thick ice and poor weather, it was decided to airlift the passengers out if conditions allowed.

A helicopter carried by the the Xue Long was used on Thursday night to transport 52 passengers, including six New Zealanders, to the Aurora Australis. 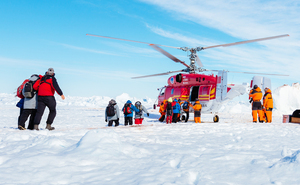 They were airlifted in relays from a makeshift landing pad on the ice beside the Russian ship and landed on an ice floe near the Aurora Australis. The group was then moved in five flights of up to 12 people. Each return journey to the Xue Long, about 10 nautical miles away, took about 45 minutes.

Expedition leader Chris Turney said: "We've made it to the Aurora Australis safe & sound. A huge thanks to the Chinese & @AusAntarctic for all their hard work! #spiritofmawson."

However, the maritime authority said on Friday it has been notified that the Chinese icebreaker was now concerned about its ability to move through the heavy ice.

The authority said there is no immediate danger to anyone on the Xue Long, which will try to get through the ice overnight on Friday. However, the Aurora Australis has been asked to stay in open water in the area as a precaution in case the Chinese ship needs help.

Passengers rescued from the Akademik Shokalskiy still have a fortnight to wait until they arrive in Australia.

The maritime authority's emergency response manager, John Young, said the Aurora Australis will travel to Casey Base in Antarctica to collect supplies before heading for Tasmania and won't arrive in Hobart until mid-January.

Twenty-two Russian crew members have stayed behind on the Akademik Shokalskiy in the hope they can free it from the ice.

The Australian maritime authority said it may need to call on the French Antarctic base if the ship gets into trouble. John Young said the base is about 160km away and has aircraft that can operate in the conditions.

The authority would monitor the situation on a day-to-day basis and would be in constant contact with the crew, who have at least 40 days of supplies.