The Australian Maritime Safety Authority says it is likely those on board a Russian ship trapped in thick Antarctic sea ice will have to spend another night there.

The Russian ship carrying 52 scientists, tourists and journalists, including six New Zealanders, and 22 crew has been stranded near Commonwealth Bay, about 1500 nautical miles south of Tasmania, since 24 December when it made a distress call. 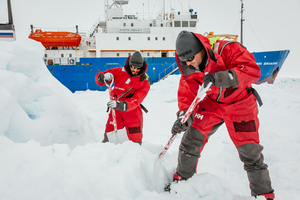 Chinese and Australian ice-breakers the Xue Long and the Aurora Australis have tried to get to the ship three times but have been hampered by the ice and bad weather.

There are plans to evacuate the passengers and four crew members to the Xue Long and transfer them by barge to the Aurora Australis, which would take them to Australia. The Russian ship would also be restocked.

However, authority spokesperson Lisa Martin said on Wednesday that those plans are still hold, as rain, strong winds and poor visibility is making any airlift attempt unsafe.

"The last information we had was that it was raining, there were 20 to 30-knot winds and the visibility was low, down to 1 nautical mile. So at this stage, it's too unsafe for them to launch the helicopter, they're just monitoring the weather and waiting for a window to open up."

Ms Martin said the weather in the Antarctic does change quickly, and any recovery is likely to be launched at very short notice.

Earlier, passengers and crew rang in the New Year with dinner, drinks and song.

The Akademik Shokalskiy left New Zealand on 28 November this year on a private expedition to commemorate the 100th anniversary of an Antarctic journey led by Australian explorer Douglas Mawson.