A helicopter from the Chinese ice-breaker, Xue Long (Snow Dragon), has flown over the Russian research ship, Akademik Shokalskiy, which remains stuck in Antarctic sea ice. 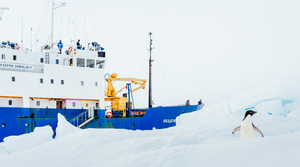 The helicopter did not land and it is thought the flight was a test run should it be needed to evacuate the 74 people onboard the research ship.

Xue Long (Snow Dragon) got to within six-and-a-half nautical miles of the Adademik Shokalskiy on Friday night before having to stop its rescue efforts because the ice was too thick.

The ship is now awaiting the arrival of an Australian ice-breaker, the Aurora Australis, which is expected about 2am (New Zealand time) on Monday.

The BBC's Andrew Luck-Baker is onboard the Akademik Shokalskiy and says conditions have improved over the past few hours.

"The pack ice seems to be opening up a little bit all the way around us, in fact there are big cracks appearing away towards the horizon, pools of water beginning to open up and we're just wondering whether this is our lucky break."

The Akademik Shokalskiy is well stocked with food and is in no danger, according to the team.

The BBC reports that although trapped for the moment, the scientists are continuing their experiments. They have been measuring temperature and salinity through cracks in the surrounding ice.

They are following the route explorer Douglas Mawson travelled a century ago.

The goal of the modern day Australasian Antarctic Expedition is to repeat many of the original measurements and studies of the Mawson expedition to see how facets of the environment have changed over the past century.