Officials in southeast Brazil say at least 44 people have died and more than 601,000 have been left homeless after weeks of torrential rain. 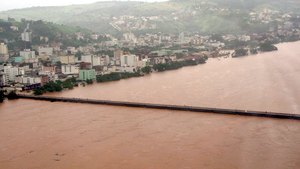 Civil Defence officials in Espirito Santo state reported a total of 27 deaths, including eight on Thursday, in the worst rains in 90 years.

Seventeen deaths have been reported in Minas Gerais state, where the downpours began in October and have worsened this week. A total of 79 towns are affected across Minas Gerais.

Last week, a family of six died when a mudslide swept away their home in Sardoa, in the eastern part of the state.

After flying over the area on Tuesday, President Dilma Rousseff pledged federal aid.

Another storm left 16 people dead and flattened more than 200 houses in the city of Lajedinho in the northeastern state of Bahia in early December.