Businesses in Napier say they are angry, upset and out of pocket after the city's art deco festival was cancelled due to last week's Covid-19 scare. 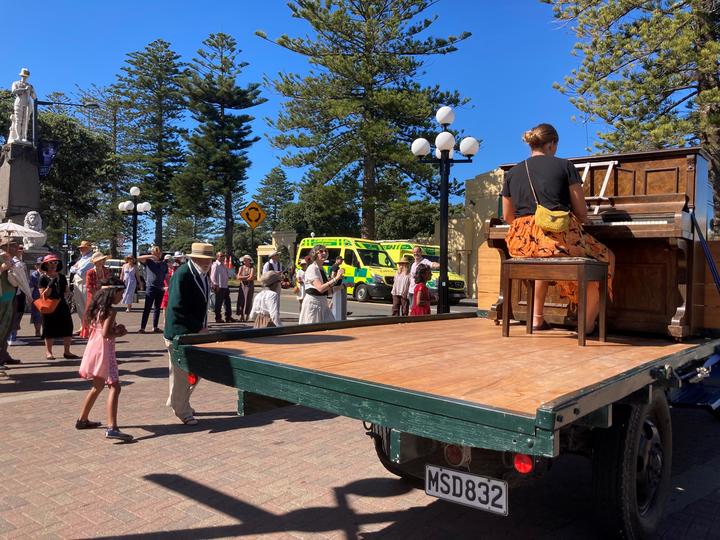 People dancing along to a piano tune by Marine Parade on Saturday to celebrate art deco without the festival. Photo: RNZ /Tom Kitchin

Some say it was a knee-jerk reaction by organisers.

The loss of one of the festival did not stop some people in Napier dressing up in 1930s attire and dancing in the streets at the weekend.

Some independent events still went ahead.

But the determination to party in the sun could not completely mask the disappointment - especially from businesses.

Louise Cuthbert runs Napier Cultural Hīkoi Walking Tours and had some lined up for people attending the festival.

But when she heard it was cancelled, she was shocked.

"I'm feeling very upset and let down basically by the art deco festival," she told RNZ.

She says after all the challenges of 2020, the festival was a beacon of financial hope.

"We were very let down because it is a part of our cash flow, I don't have any cash flow and that's what this week is really stressful about."

She also struggled to find out how many people booked a tour through the art deco platform.

"I kept trying the next day to actually get some email from them to say what bookings had actually happened, so I knew roughly how many people were trying to come on our tour so basically the communication was very awkward, very rude and very weird."

The Napier Repertory Players were putting on a play about the history of the earthquake for art deco weekend, but had to cancel.

Again, it was their busiest time of the year.

Repertory president Glenn Cook said the Art Deco Trust communicated well with him, but still thought it was called off too soon.

"I think it was made relatively early, and I would've like to have seen if they could have waited the next morning basically, we had sort of an announcement come out that things had progressed and things were under control in Auckland and it certainly would have made a big difference."

But Art Deco Trust chairperson Barbara Arnott stood by the decision. She said the trust had no choice. 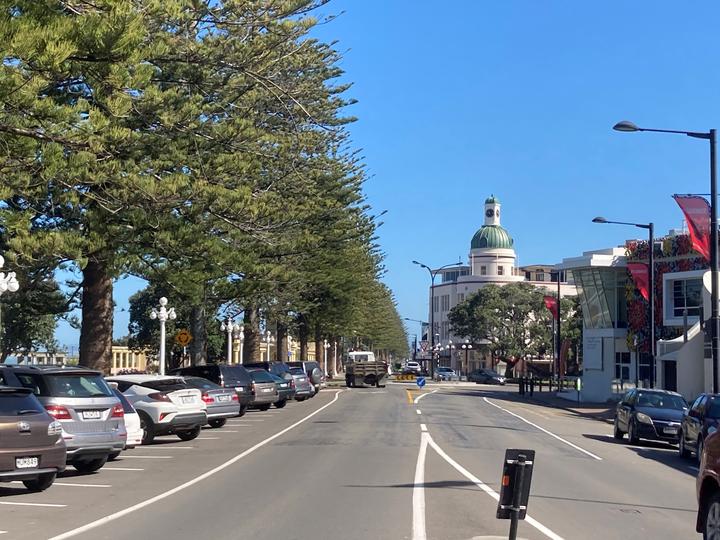 Art deco buildings are a huge part of Napier’s identity, including The Dome, built in 1935. Photo: RNZ / Tom Kitchin

"It was unavoidable, our position was untenable. We'd already cancelled Wednesday and Thursday and a five day festival, the logistics are massive. We had to start setting up on the Monday to actually manage the festival for the whole time."

She says most understood the decision.

"Only one or two actually sent us an email to say that they thought that we should have waited. By far the majority said 'we understand it's a difficult decision, we understand the logistics of putting on a five day festival and we understand you would've had to have called a halt to it at a certain stage."

In an email leaked to RNZ and sent to event partners, festival director Greg Howie acknowledged partners had been contacted by the media asking questions about the festival.

"Of course it is completely up to you whether you chose to respond or not. However, please be aware you are under no obligation to," he wrote.

Barbara Arnott told RNZ why this was done.

"A sponsor sent us an email to say they had been contacted by the media and they didn't want to talk to the media. That sort of rang a little alert, we value our sponsors and our associated sponsors too and we didn't want to put them under any pressure so I think Greg sent out an email, just saying no pressure you can talk to them if you want to, but there's no obligation to."

There were also rumours in the community that Hawke's Bay Airport was pushing to cancel the festival but its chief executive Stuart Ainslie told RNZ that was "just ridiculous".

"Hawke's Bay Airport was saddened that the festival was cancelled, but continues to support Art Deco Trust and everything it contributes to our regional economy and the important advocacy that it provides for art deco heritage," he said.