The mother of a slain police officer has begged politicians to introduce harsher punishments for those who murder police. 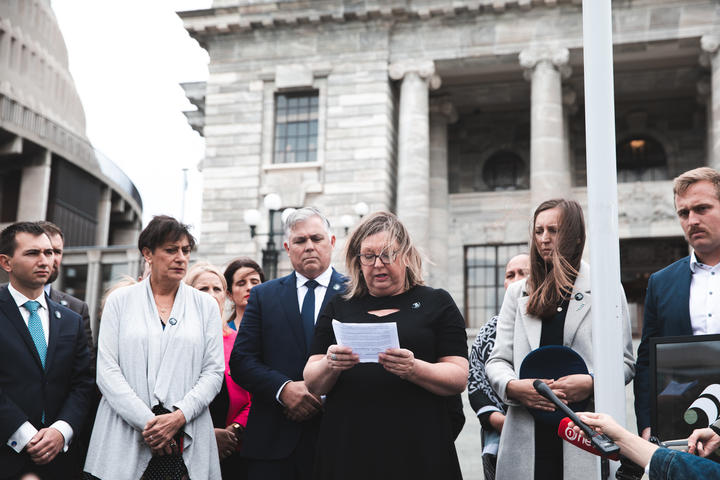 Diane Hunt's son Matthew Hunt was shot and killed during a routine traffic stop in Auckland in June.

Today she presented a petition to Parliament - signed by nearly 40,000 people - asking for law changes so anyone convicted of murdering an officer gets a mandatory life sentence without parole.

Matthew was 28 when he died in a hail of bullets after trying to pull a car over in the Auckland suburb of Massey.

His mother said he had only been on the force for a couple of years and was hard working and diligent.

"He loved CrossFit and golf. He had a diving certificate. He was very, very physically active.

Hunt said her son was targeted because of his uniform and she wanted others who put it on to be safe.

Today she went to Parliament with a petition imploring politicians to make changes so her son did not die in vain.

"The reason for my petition is simple, Matthew's death is a sobering reminder of the daily sacrifice our police officers make to ensure we can continue to live our lives in the manner in which we are accustomed."

She would not commit to enacting the changes, but said the government was already working hard to reduce gun crime. 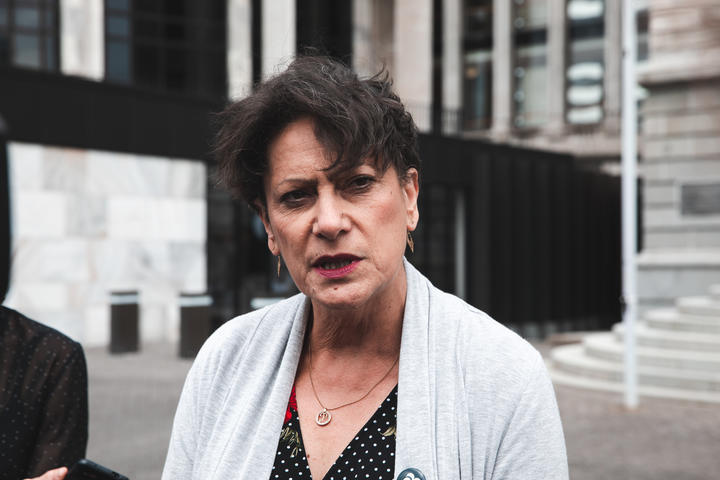 "At a community level ... we can do much more work and diverting young people from getting into gangs ... but there's also the transnational organised crime that we are working on as well."

National Party police and justice spokesperson Simeon Brown said if the government would not act, his party would take up the fight.

"This may well be an issue that a member also puts forward as a member's bill into Parliament to try and get some progress," Brown said.

"To send a very clear message that National backs our frontline police officers who are ... serving New Zealanders, keeping us safe."

He said the party did not support the widespread arming of police. 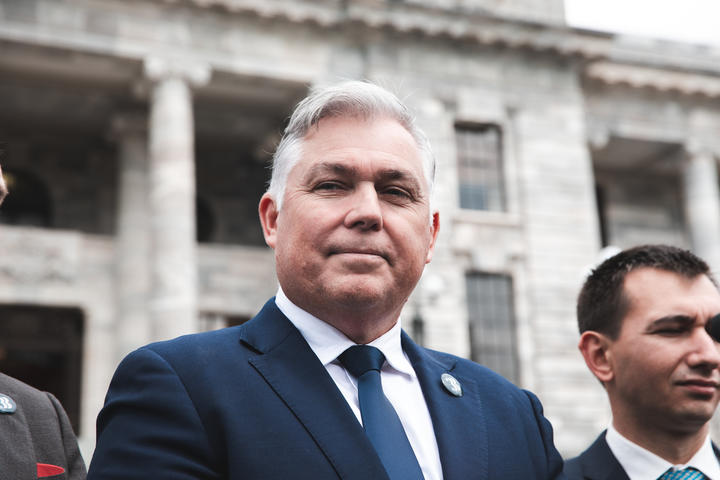 His colleague and former police officer Mark Mitchell however said the rate of gun crime was increasing and arming should be adopted so police had the tools to deal with it.

"I think that we have to reflect the reality of it now, and that is the fact we're seeing young officers like Matthew Hunt gunned down at midday on the streets of Auckland.

"We have to make sure that if the crims are armed, then actually our police have got the tactical ability to be able to respond to that."

In Northland in recent months there has been a spate of incidents where officers have been shot at.

Yesterday a man opened fire on a police dog and, in turn, was shot three times - with both the man and dog taken for medical treatment with serious injuries.

Mitchell said the incidents showed the government's approach was not working.

Statistics show that attacks on police by people with guns remained steady over the past five years, averaging out at about once a month.

Diane Hunt laid out 33 white crosses representing all the on-duty officers slain since 1890. 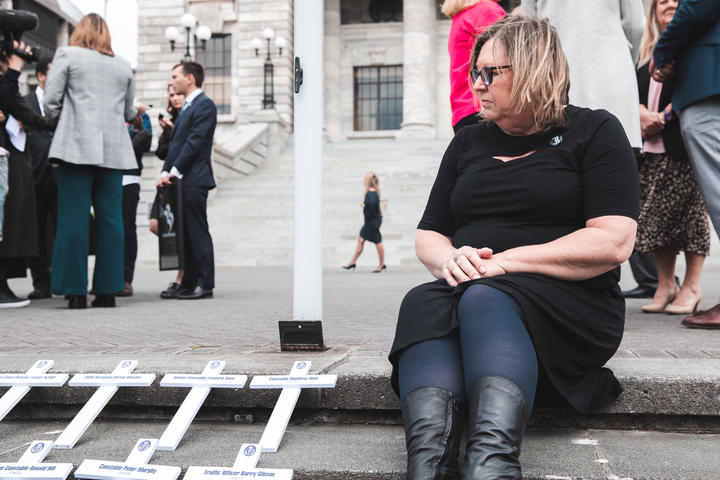 Diane Hunt looks at the white crosses she laid out, representing all on-duty officers slain since 1890. Photo: RNZ / Samuel Rillstone

Law lecturer Khylee Quince said while all deaths were tragic, the data showed that the killings were very rare and that policing in New Zealand was actually fairly safe.

Quince said judges already had the ability to hand out harsher sentences to those who attacked first responders - such as police - and that removing judges' discretion was a bad idea.

He said Hunt's idea was against fundamental legal principles such as that all people should be treated the same by the law.

"One, that all citizens are equal, and the second thing is proportionality. You are sentenced to an outcome that is proportionate to the harm that you've caused."

Quince said Māori and Pasifika people were more likely to be on the receiving end of police brutality and violence and in retaliating would be more likely to face the harsher penalty proposed.

JustSpeak Director Tania Sawicki-Mead said the overwhelming evidence showed that prisons as the default response to crime increased harm in the community.

"Restorative models for justice are proven to have better outcomes for people who have been harmed and their families, supporting wellbeing and safer communities, and are used internationally to address even the most serious crimes.

"The way we do justice is failing, and we cannot continue investing ever-expanding resources into a failing approach and hope to reach different outcomes."