The hands of Kereama Hohua with Danny McRoberts shaped the first pouwhenua placed on one of New Zealand's oldest pā sites in modern times. 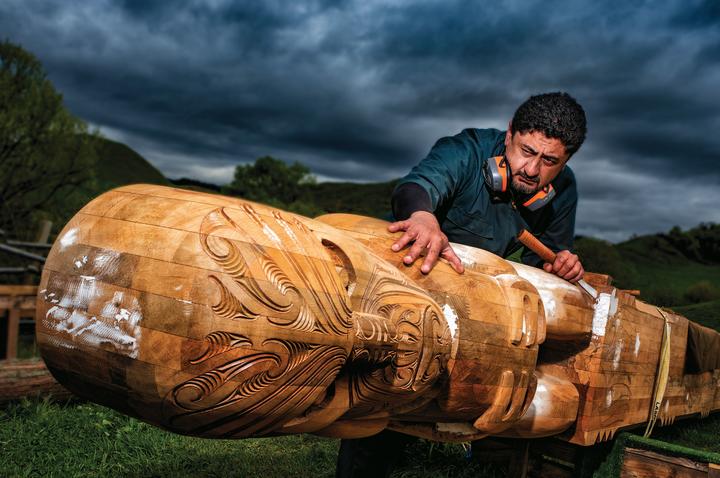 Kereama Hohua carefully shapes the new Toi Kai Rākau pouwhenua to be placed at Kohi Point. The pouwhenua is made of native kauri. Photo: Whakatāne Beacon / Troy Baker via LDR

Now, 20 years on, Hohua is etching the carved replacement of Toi Kai Rākau, which will stand on Kapu-te-rangi pā site at Kohi Point.

Hohua is one of the few living kai whakairo (carving) artists in the Mātaatua rohe and has been working on Toi Kai Rākau from his home in Ruatoki for the past month.

"I float in and out of the contemporary space, but I try to remain grounded with intergenerational practice that has been handed down to me, when it's directly related to our tīpuna," Hohua said.

"I have always valued my position in the community because it reminds me where I come from and whom we connect to."

Hohua said koro Ching guided him and McRoberts through the previous installation of Toi Kai Rākau.

He said Tutua had an aroha for this particular pouwhenua saying the milestones of this tīpuna Toi Kai Rākau were symbolic of the Mātaatua relationship between local iwi and native rākau (wood) in the rohe.

"My inspiration is drawn from people and place, I try to tell that story through my mahi," Hohua said.

"Kai whakairo artists have been mapping the story of social change through rākau for generations in this community and Toi Kai Rākau stands at the helm of that practice."

Hohua said there were a number of examples of whakairo that encompass change in this rohe.

These include the Ngāti Awa Mātaatua whare, which is a catalyst for the perseverance of the Mātaatua people and which adorns the seaboard of Wairaka.

Te Kupenga o Taramainuku in Te Teko at the gateway of Mātaatua, marks an historical pā that hosted social, political and economic talks resourced by the Rangitāīki River. Te Kura Whare is also an introduced rākau technology led by kai whakairo anthropologist Tamati Kruger that archives the vision of the Tūhoe people pre- and post-settlement.

Hohua said the new pouwhenua would be similar to the last with a few differences. For example, this pouwhenua's tā moko curves around the ears, something Hohua said was unusual to see but he found aesthetically pleasing. 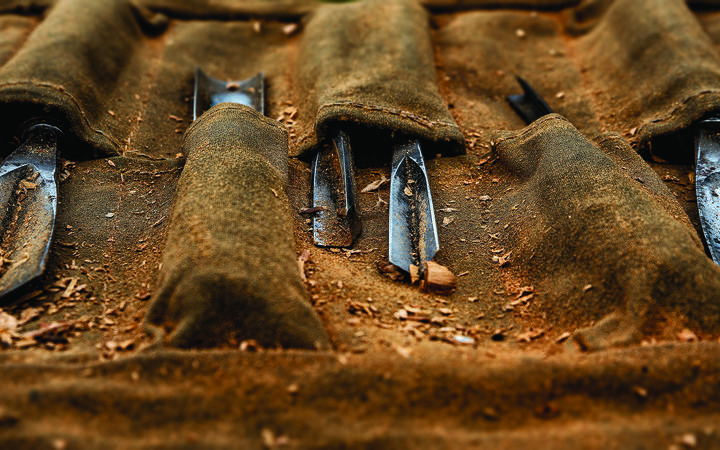 Kereama Hohua first began to learn the art of Kai Whakairo when he was 19 and is one of the few living artists around today. Photo: Whakatāne Beacon / Troy Baker via LDR

Hohua said it was ironic that the Kohi Māori seat at the Bay of Plenty Regional Council was filled by a councillor also by the name of Toi Kai Rākau.

"I hope the community gives him the opportunity to truly represent," he said.

"During the pandemic we have seen an immense shift globally and it would be good to see the Whakatāne District Council, Te Rūnanga o Ngāti Awa and the surrounding iwi lead in courageous conversation regarding our community.

"It's important for the Whakatāne region to come together and talk about the current social environment after the effects of the community being locked down in their homes during Covid-19," Hohua said.

Hohua and McRoberts are responsible for several other works around the district including the restoration of the Mātaatua whare where Toi Kai Rākau also stands sheltered alongside other tīpuna, the Warren Cole walkway and the RSA memorial gateway.

He said the memorial gateway was a particularly intimate piece of work for him due to his family's involvement in the 28th Māori Battalion during World War II.

In the 1940s, the Hohua whānau from Rūātoki had nine brothers go to battle. The whānau were fortunate to have eight brothers return home.

Te Rūnanga o Ngāti Awa will hold a karakia for the burial of the previous Toi Kai Rākau. The date for the unveiling of its replacement is yet to be set.