Prime Minister Jacinda Ardern has received a red-carpet welcome with full military honours as she arrived to meet the German chancellor Angela Merkel in Berlin. 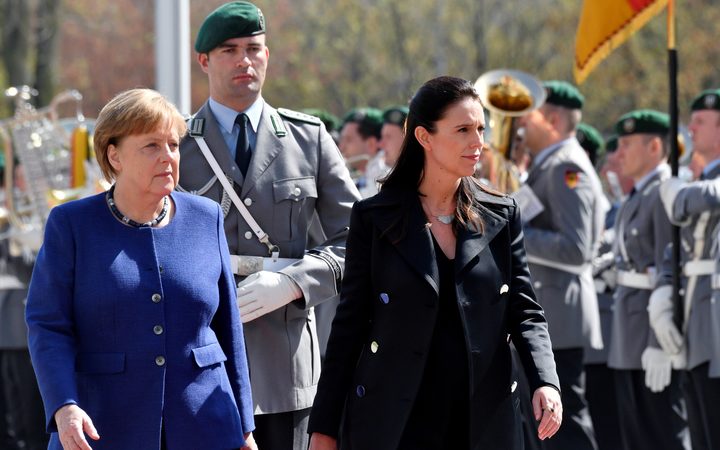 The two leaders met for the first time on Tuesday evening (NZ Time) before heading into an hour-long working lunch at the Federal Chancellery.

Dr Merkel greeted the Labour leader on the courtyard outside the executive building underneath the New Zealand, German and European Union (EU) flags.

As the two walked across the courtyard, smiling, Ms Ardern remarked, "I'm going to follow your lead".

A military band then played both countries' national anthems, after which the leaders walked the length of a red carpet to inspect a guard of honour.

The grand proceedings are put on for all world leaders on their inaugural visit.

The leaders were expected to discuss a range of issues including the military conflict in Syria and a potential trade deal between the European Union and New Zealand.

They will then speak to media at a joint news conference.

The visit comes after a meeting yesterday with French president Emmanuel Macron where he expressed support to begin EU-NZ trade talks.

Germany has long supported taking such action. In January last year, Dr Merkel pledged to push the EU to work towards a quick trade accord after meeting then-Prime Minister Bill English.