A second man has been arrested in connection with Friday's attack on a London Tube train, police say. 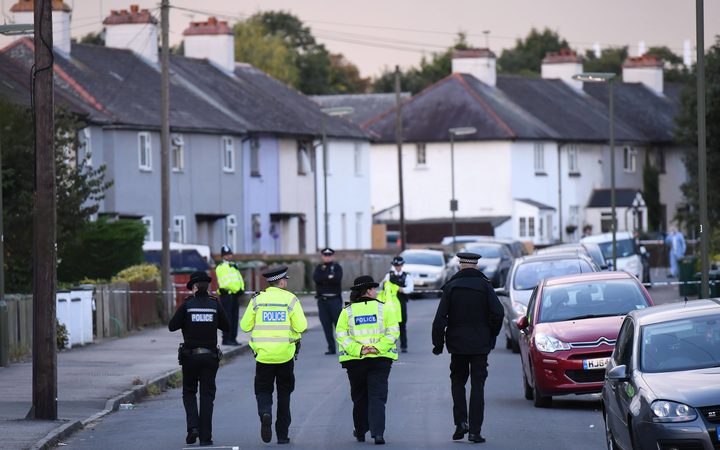 Police stand guard during the raid in Sunbury, Surrey near London. Photo: AFP

The 21-year-old man was arrested in Hounslow, west London, on Saturday night on suspicion of a terror offence and is in custody in south London.

An 18-year-old man is being held on suspicion of a terror offence over the Parsons Green explosion, which injured 30 people.

He was arrested at the Port of Dover earlier on Saturday.

Police are continuing to search a house in Sunbury-on-Thames in Surrey.

The house belongs to an elderly couple known for fostering hundreds of children, including refugees.

Ronald Jones, 88, and Penelope Jones, 71 were rewarded for their service to children by the Queen, who made them MBEs in 2010.

The couple are said to be staying with friends following the police raid, during which surrounding houses were evacuated.

Friend Alison Griffiths said the couple had an 18-year-old and a 22-year-old staying with them recently.

She described Mr and Mrs Jones as "great pillars of the community", adding: "They do a job that not many people do."

In the attack on Friday, a home-made bomb sent a wall of flames over commuters at Parsons Green on Friday, but apparently failed to detonate fully.

A senior police officer, Neil Basu, told reporters a number of items had been recovered after the house raid.

"At this stage we're keeping an open mind around whether more than one person is responsible for the attack.

"And we are still pursuing numerous lines of enquiry and at great pace. Our priorities are to identify and locate any other potential suspects."

Some 30 people - including a New Zealander - were hurt by the flames or injured fleeing them though only three remain in hospital.

Most people caught in the blast were treated for minor injuries and have been released, NHS England said, but three people remain in Chelsea and Westminster hospital in central London.

The first man arrested in relation to the attack was captured in the departure area of Dover port on Saturday and was moved to a London police station.

"There is no doubt that this was a serious IED. It was good fortune that it did so little damage, in fact, although we are of course sympathetic to all the people who did get affected by it.

"We will have to make sure that we will take all the steps we can to ensure that the sort of materials that this man was able to collect become more and more difficult to combine together."

"We will always learn from these incidents.

Ms Rudd said it was "much too early" to say whether those behind the attack were known to authorities, adding: "The operation is ongoing".

The Islamic State group said it was behind the bomb, which would have killed everyone around it and maimed everyone in the train carriage for life had it worked as intended, BBC security correspondent Frank Gardner said.

The Met's Assistant Commissioner Mark Rowley said it was "very routine" for the Islamic State group to claim the attack, whether in contact with those involved or not.