Farmers near Auckland say it will take them years to recover from the damage caused by last week's heavy rain and flooding. 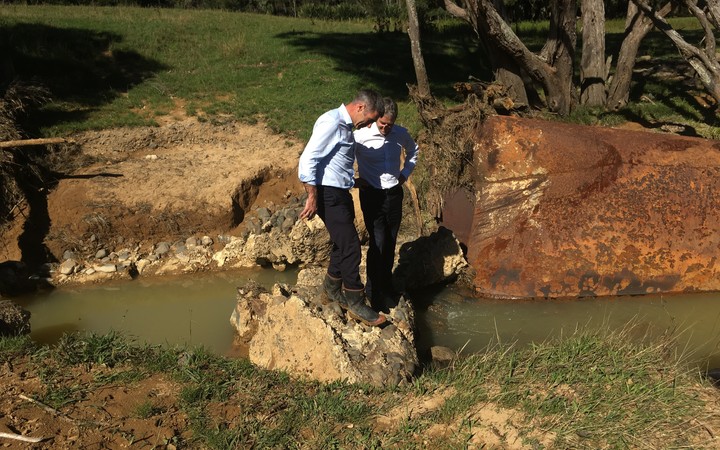 The hill country around Kawakawa Bay near Clevedon has been scarred by slips.

A week on from the first big deluge, there was still debris lodged in fences and riverbanks were scoured where streams had turned into raging torrents.

Auckland deputy mayor Bill Cashmore, who has farmed in the area for decades, said the clean-up was going to take a long time.

"We've got two diggers going at the moment, and we'll get the access ways back in place and then we'll do the culverts and bridges, and then we'll start doing the fences."

It would amount to about three years' work, on top of their normal farm work, he said.

Last week's flooding came close to the worst he had seen.

Matingarahi farmer Steve Knudsen said it would take him a couple of years to get his property back in order.

There were many slips on his farm and significant damage to tracks.

"It's almost like the slips have come out under the track. I think a lot of the slips have been caused by water that has gone down into the ground and then come up out of the ground, not necessarily water running off the top."

Nearly all of his floodgates had broken.

"I've got two floodgates that are still intact but both of those floodgates have got the fence demolished either side. All the rest are gone," Mr Knudsen said.

The water supply was still out to half of Mr Knudsen's farm. As well the flood clean up, he was still carrying on with his usual livestock work.

The storm damage has been declared a medium-scale adverse event in the Franklin ward, and Hauraki and Thames-Coromandel districts, triggering extra government help and support for those who have been hardest hit.

"I've seen some farmers that are just out there doing what they do, standing their fences up and getting on with life," Mr Guy said.

Farmers could get help from the Waikato Rural Support Trust.

Those facing severe financial hardship could apply to Work and Income for rural assistance payments.