The outcome of the Trans-Pacific Partnership talks in Atlanta is expected to be known early tomorrow morning New Zealand time as negotiators work through a fourth night to try and nail down a deal. 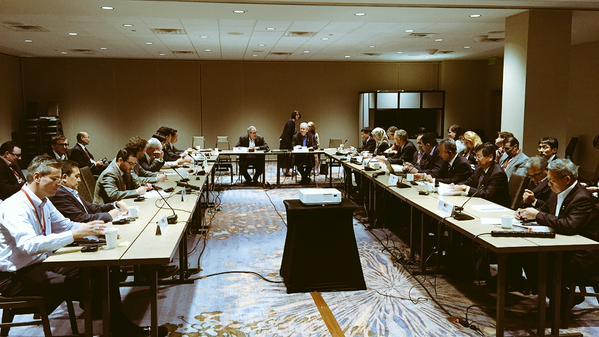 The opening session of the ministerial talks in Atlanta. Photo: Twitter / @USTRspox

A ministerial media conference in Atlanta was delayed indefinitely earlier today after already being pushed back twice.

But officials remain confident a Trans Pacific Partnership deal can be done.

Optimism about a TPP deal rose after a breakthrough between the United States and Australia in Atlanta early this morning over the protection period for new-generation drugs.

But an announcement on the TPP was pushed back as other countries haggled over the details.

New Zealand is also making one more push to improve market access for dairy, which the Dairy Companies Association said was still unsatisfactory.

Trade ministers, including New Zealand's Tim Groser, have been meeting for the last five days in a bid to complete a 12-nation regional trade zone that encompasses 40 percent of the global economy.

Auckland University law professor Jane Kelsey, who opposes the TPP, said New Zealand's dairy demands were seen as totally unreasonable, but she believed a deal will be done in Atlanta as negotiators were aware time is running out.

She told Checkpoint that it was clear New Zealand would get much less on dairy than what Mr Groser originally proposed.

Beef and Lamb New Zealand's northern American regional manager Terry Miekle was in Atlanta as the clock ticked down to a hoped-for deal. He said the countdown was on and the pressure and nerves were high.

"When you're coming down to the last hour and then the hour gets pushed out by another couple of hours, the nerves tend to rise," Mr Miekle said.

"But we're in the stakeholder area, obviously we're not with the negotiators, per se, they're a couple of levels up in the hotel as are obviously the ministers, so we don't get a huge amount of contact with our negotiators, in fact our negotiators have been working around the clock for the last five, six, seven days. It's been a phenomenal effort by all of them.

Mr Miekle said the details of what's holding up an agreement were unclear.

"It's very difficult to determine exactly what's effectively the last item standing, but all of the rumours circulating down the bottom of the hallway here are certainly that dairy is one of, if not the last, it's one of the last two - biologics and dairy. And my understanding is our minister has been working furiously throughout the night on this, as have others on the biologics issue."

Mr Miekle says no details have been released, but he understands there are no changes to the deals on New Zealand meat.

"We believe we will be getting a tariff reduction over about 15 years down to the vicinity of 9 to 10 percent and that's into the Japanese market, now that's coming of a 38.5% current tariff, but also importantly we're looking to get an open access into the US and Canadian and into the Mexican markets."