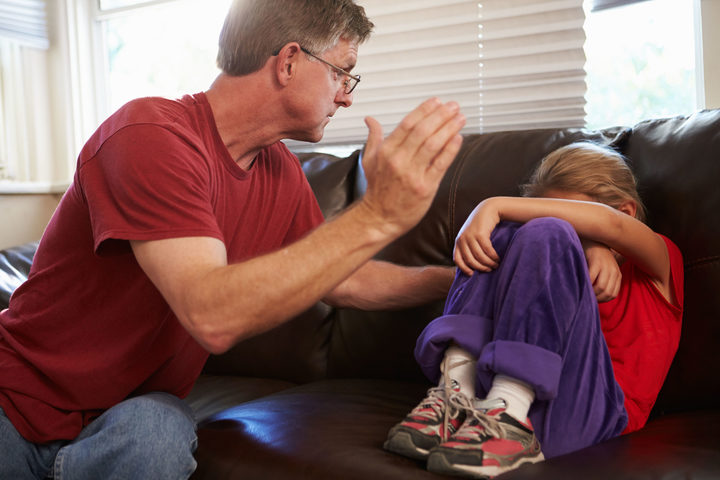 If her two pre-schoolers are naughty, Maria* uses a kind of three-step process to sort them out. “We go from saying ‘no’, to putting them in time out, to smacking them on the hand,” the Dunedin stay-at-home mother says. “If my 2-year-old is hitting his brother, or doing something dangerous, smacking is the only way to make him understand.”

Maria, 30, is matter-of-fact about her attitude to physical discipline. Her husband and other family members are also pro-smacking, as are most of her friends with kids. Spend a bit of time on internet parenting forums and you’ll find plenty of mums and dads who share her views, which seems shocking in a country where parents lost the right to physically discipline their children 11 years ago.

“I don’t believe that putting children in time out is enough for some kids,” Maria says firmly. “It’s not enough of a deterrent to stop them doing something wrong again. Smacking helps them learn.”

After all, she says, it didn’t harm her: “Of course I remember being smacked. If you did something really naughty back then you knew what was coming. Some people say it creates fear of the parent but that’s rubbish. I was scared of being smacked, but I never felt my parents wanted to hurt me.”

Even so, Maria didn’t want her real name used in this story. She’s not afraid of smacking her kids, but she avoids doing it in public because she doesn’t want to be a social pariah. “Some people are just ridiculous over it and I don’t want them to call the police on me,” she sighs.

“I don’t think they were right to ban smacking,” she says. “Parents need a bit more leeway. I honestly don’t consider a smack on the hand or the bottom to be child abuse.”

Smacking - or using “reasonable force” to discipline a child - has been outlawed in New Zealand since 2007. The repeal of section 59 of the Crimes Act, championed by former Green MP Sue Bradford, caused a massive furore at the time with many claiming that it would criminalise ‘good parents’.

Many misunderstood the intent of the legislative change, which was designed to remove the defence of "reasonable force" in cases where parents and caregivers were being prosecuted for assault on children. In other words, if you were in court for savagely beating your child, you could no longer claim that they deserved it because they’d been naughty.

A 2009 review conducted by clinical psychologist Nigel Latta, then-police commissioner Howard Broad and Ministry of Social Development chief executive Peter Hughes found that agencies were not hunting down smackers and that the fabric of family life was not deteriorating because parents had become too frightened to discipline their kids. Then prime minister John Key said the review showed that light smacking was “acceptable” and that parents were free to choose whether they did it or not.

So someone like Maria is highly unlikely to find herself in trouble with police or child protection agencies, but that hasn’t ended the debate. Last year New Zealand First leader and Northland MP Winston Peters announced that he wanted to repeal the law change, claiming that it didn’t work. Similar arguments are simmering away in the UK. Scotland has outlawed smacking, Wales is currently consulting on a ban, and in England Theresa May’s government is facing pressure to follow suit.

As it stands, England is one of many countries where parents can still justifiably claim they are using physical discipline to ‘reasonably chastise’ children. Last year a global UNICEF child protection report found that close to 300 million children aged 2 to 4 regularly experience violent discipline from caregivers; 250 million (about six in 10) are physically punished. Just 60 countries have legislation that fully bans corporal punishment against children at home. The UNICEF study found that around 1.1 billion (slightly more than one in four) caregivers say that physical punishment is necessary to help them raise or educate children properly - despite screeds of research that says smacking doesn’t work.

In 2016, a report by Hilary Nobilo for The Brainwave Trust cited findings that “children who are physically disciplined are more likely to become aggressive and display anti-social behaviours than children who are not physically disciplined. They are likely to have poorer relationships with their parents and are at greater risk for mental health problems such as depression as they grow”. Even so, a decade after the law was changed in New Zealand, a 2017 University of Auckland study found that nearly a third of Kiwi parents smacked their children. Ten per cent admitted doing it frequently.

'IF YOU'RE RESORTING TO PHYSICAL VIOLENCE THEN YOU'VE LOST EMOTIONAL CONTROL' 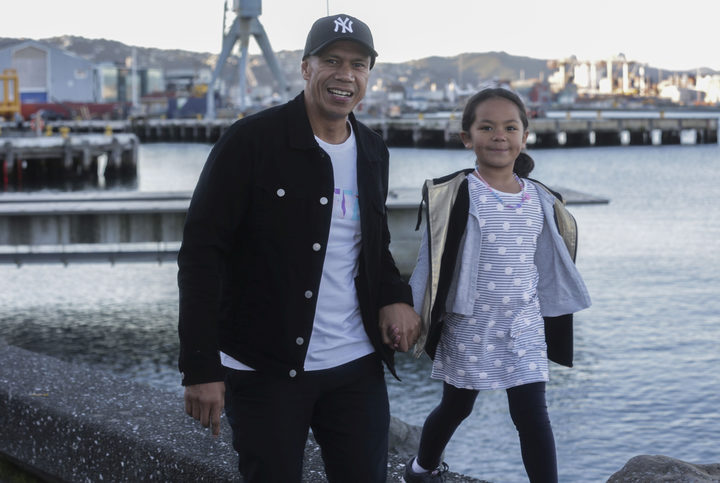 "I have never, never raised a hand against my children," says Natu Taufale, pictured here with his youngest child. Photo: RNZ/Richard Tindiller

Those figures appal Wellington father Natu Taufale, who vividly remembers being hit as a child. The smacks - sometimes with an open hand, a stick, a garden hose or “whatever was close by” - were administered by his father in the name of discipline.

“My siblings and I were quite naughty kids,” the 52-year-old says. “It was always, ‘wait until your father comes home’. It was just accepted in Samoan culture that you got smacked; it was just part of life. We were lucky though, because they only did it to stop us misbehaving. We didn’t get beatings, or get smacked just because they felt like it.”

The physical discipline had stopped by the time Natu and his brothers were at high school - “We were a bit more mature by then, and also we were as big as our dad” - but he still remembers worrying about how to react.

“I remember thinking, ‘I deserve this because I was naughty’, but I never knew if it would be better to just sit there and take it so he would respect me, or if I should cry straight away so it would stop.”

Taufale, national director of coach development for Basketball New Zealand, appreciates that his parents thought they were doing the right thing. They were first-generation migrants who were under huge pressure to survive in their new country, and they worked hard to create a secure and loving home. But he swore that he’d never use physical discipline against his own children.

“If you’re resorting to physical violence then you’ve lost emotional control. It’s just not rational. I didn’t want to be that guy.”

He feels so strongly about it that last year he intervened when he saw a stranger violently smack a child in a restaurant. “We were on holiday in Thailand with my wife’s family and I saw this guy raise his hand and smack this little girl, who would have been about 3 or 4. He hit her so hard she nearly flew across the room. I went straight over to their table and said, ‘Look, I’m sorry but you can’t do that. You can’t hit a child like that. Where I come from, that’s wrong’.”

The man was unrepentant and his wife just sat there, Taufale says. “I couldn’t believe they would do that to their own child. I just felt so sorry for the kid.”

As a father of four - Natu has three older daughters and one younger, aged 6 - he knows that parenting can be hard work. “But I have never, never raised a hand against my children, even when they’ve been really naughty or they’ve made me really angry. I’ve just walked out of the room and thought, ‘OK, you’ve got to come down from level red to cool-headed level blue’. There are other ways to get the message across. For me, it was always about making sure your kids understood what they’d done wrong and taking ownership of that.”

He believes there needs to be more support for parents, particularly young ones, and says the law change should have gone further. “At the moment it’s not enough to change people’s behaviour. There needs to be more done to show people what good parenting looks like, to help them understand what else they can do so they don’t hit their kids.”

‘I WAS GENUINELY CONCERNED GOOD PARENTS WOULD BE CRIMINALISED’ 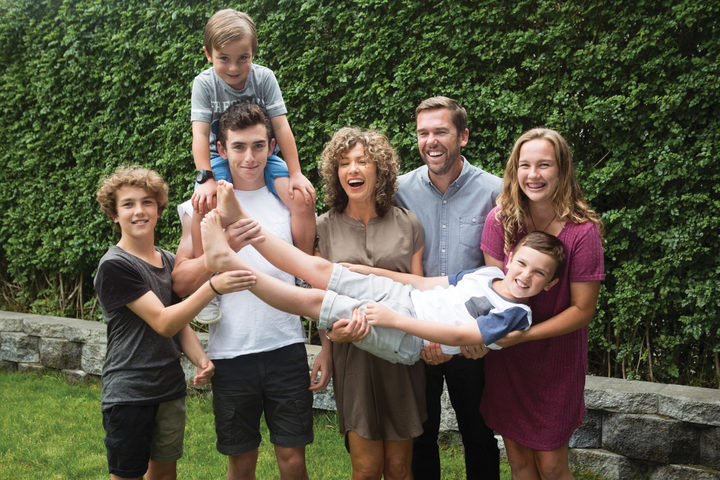 “I wasn’t super keen on the 2007 law change, because I was genuinely concerned that good parents would be criminalised,” he says. “I think every parent I’ve ever met wants to do best job they can and they want to learn from what their own parents did. One of biggest things lacking for parents is confidence, and I believe that focusing on the law would go on taking away their confidence to parent in one way without giving them any alternative.

“By leading with the law, we ended up making it so contentious that parents were left thinking ‘what are we going to do now?’ I thought it would be better to provide an abundance of alternatives so that culture would change in such a way that people would realise that they didn’t need physical discipline.”

Fleming says his own experience has shown him what’s possible. Physical discipline was seen as a key part of ‘good’ parenting when he grew up so he and wife Kirsty thought they should follow suit when they started their own family.

“We had five kids in 11 years, and we were lucky to be in an environment where we had access to lots of support and information about parenting best practice. Not surprisingly, as each subsequent child arrived we used physical discipline less and less. With the last one, we didn’t use it at all.”

Fleming has been involved with parenting support both at grass roots and policy levels for nearly two decades. He believes most people are moving away from viewing smacking as a legitimate and proven form of discipline and he’s seeing a continual decline in its use.

“There are some exceptions, but I think we have shifted as a society. I’ve certainly found that if you provide parents with alternatives to smacking, I haven’t yet come across someone who won’t go for the alternative. There will be people out there who believe that smacking is a vital part of being a responsible parent, but I think they are an increasingly small minority. I think they implicitly know that there are better ways.”

He says successful parenting is all about strong relationships between parent and child. “Parents want kids to feel loved and secure so they can thrive and flourish in every way. They resort to physical discipline out of fear or concern that the child is becoming some kind of reprobate. But if you build confidence around that and help them get a full understanding of how kids develop, while having boundaries in place, you can focus on the quality of the relationship.”

Fleming says his organisation and others like it are responding to a constant demand for help. “Parenting is something that people now realise that they have to learn and that they need to constantly upskill in, so they’re reaching out for help in the same way that they reach out in all areas of life. What we want is for parenting to become a really supported and educated role. We’re in the age of parenting information. If we’ve got all these parents out there wanting to be the best they can be, there’s no reason why we shouldn’t be doing an ever better job of raising the next generation.”