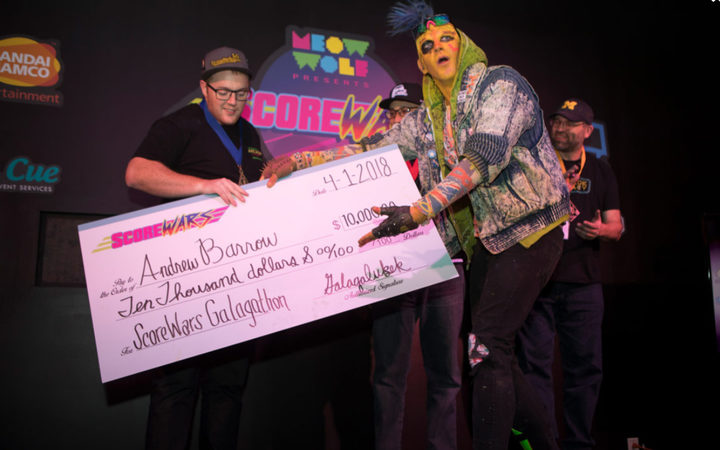 I met Andrew Barrow in an empty Timezone.

The arcade is tucked behind The Warehouse’s central Wellington store and doubles as a Laserforce.

There’s a classic basketball machine, racers with big plastic seats and a claw crane that never picks up the toy.

We edged past Big Buck Hunter and Street Fighter and eventually found the 1981 Japanese shoot-'em-up game at the back of the room.

The machine was turned off.

Andrew, the greatest Galaga player in the world and manager of a distribution centre for a packaging company in Lower Hutt, looked behind the chunk of metal but couldn’t find the plug.

Fifteen years ago, Andrew’s father first introduced him to Galaga.

“My old man and I would play in Christchurch at a video game store that had a heap of old machines. It was next to a Denny’s and Science Alive.

“I just picked it up one day and never looked back.”

Galaga looks a bit like Space Invaders. You control a starfighter that can move left and right, and you must destroy swarming enemies that are trying to crash into you. 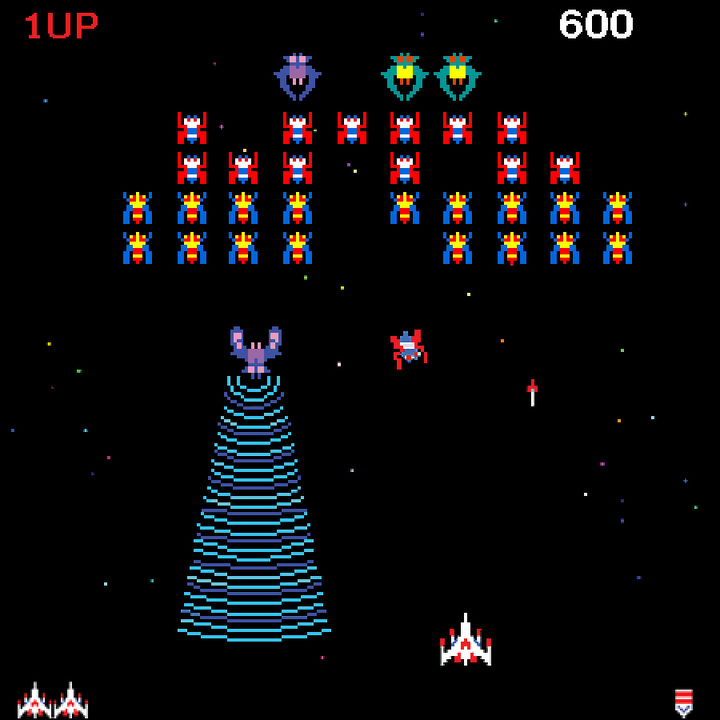 When he was 16, he put Galaga aside: “I was just doing all the things you do at that age, rather than sitting down playing video games.”

But the nature of gaming began to change. An online community was building. The growth of live streaming platform Twitch was turning recreational gaming into a potential career. It was no longer about loading pennies into a machine.

And being good at something is a lure in itself. Andrew began playing again in his early twenties.

“I just play with a joystick on my computer now and submit my scores to online leaderboards,” he said.

“It’s a real online community. People like to talk shit with each other, and because it’s such a niche hobby, it’s easy to build relationships all over the world.”

It’s not so much about the games, but the friends Andrew has made. 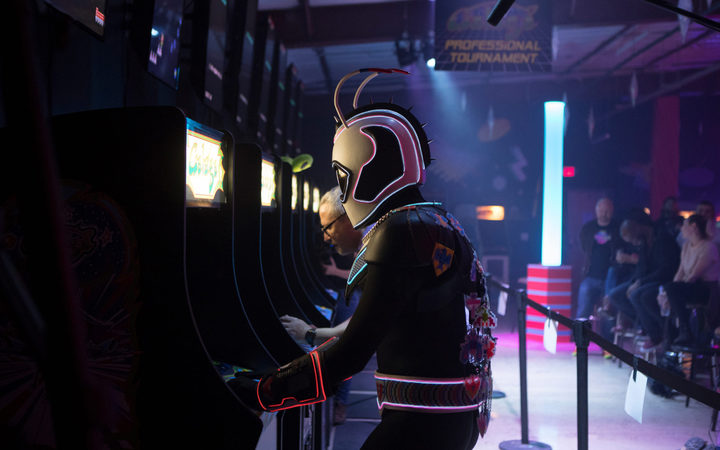 Last year the world of Galaga was shaken by “an unknown entity” - Meow Wolf.

“This art collective company in New Mexico no one had ever heard of got in touch with everyone and said it wanted to host, and fly everyone to the first ever Galaga World Championship. Apparently, its chief executive was a massive fan,” said Andrew.

None of them believed the offer at first.

Yet Andrew, 29, and a few others dotted around the world travelled to the US, all expenses paid, to compete in the four-day competition.

The event was dubbed Score Wars.

Andrew reckoned he had a good shot at claiming the $US10,000 winner’s prize. The scores he was posting online were tough to beat.

Four days of competition. Ten gamers. Two days of qualifying for the finals. There were crowds. There was smoke. There were speeches. 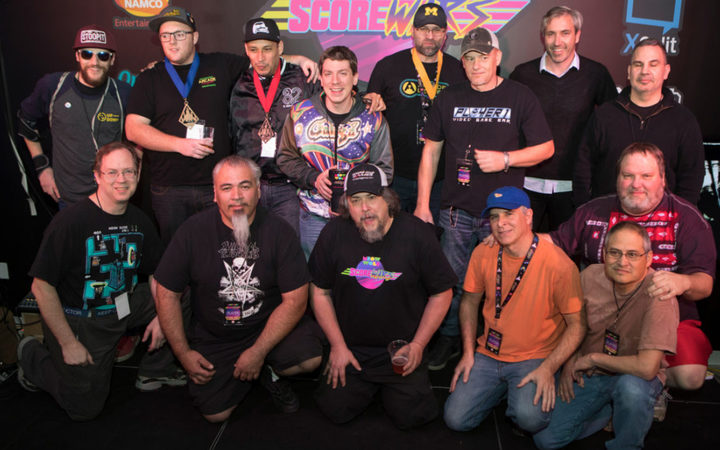 The best Galaga players in the world in one place. Photo: Kate Russell/Meow Wolf

“There’s a certain stage where you can leave the game for a few minutes, but other than that you have to stick at it,” he said.

“I had already qualified for the finals and it was about midnight and everyone had already gone home, so I decided to go back to the motel and go to my big king bed.”

Andrew breezed through his quarter-final, winning in about 20 minutes.

If there's a celebrity in the world of Galaga, it would be world record holder Andrew Laidlaw - Andrew’s semi-final opponent.

A couple of weeks before the tournament, The Seattle Times published a profile of Andrew Laidlaw describing him as “the best in the world at blowing up aliens”.

When the two Andrews faced off, there was drama.

“We were neck-and-neck for a long time - a couple of hours - but then he lost two of his ships and was just down to one. When that happens, it’s just a matter of time,” Kiwi Andrew said.

“[Laidlaw] picked up his toy alien that he keeps on top of the machine and got up and began to walk away, so I got up too to shake his hand.”

Once Kiwi Andrew stood up, he instantly lost two of his own ships. Laidlaw saw this and tried to keep playing. The organisers told him he had already conceded. 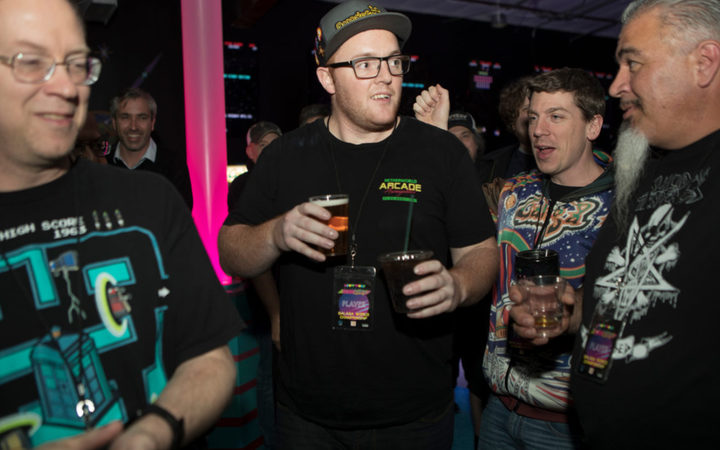 But there was no bad blood. These guys are friends.

“Armando was pretty unknown to us before the tournament. But he’d been posting YouTube clips of some incredibly high scores, so there was a bit of chatter about him beforehand.”

Armando came into the final hot, despite suffering from a bout of carpal tunnel syndrome in warmups.

Andrew took an early lead in the match, but Armando recovered from losing two of his five ships early on to pull close after two hours.

Yet the west coast gamer would lose two of his remaining three ships, and the match was over within minutes.

Andrew played on for another half-an-hour, egged on by organisers and the crowd to break Laidlaw’s record, but his heart wasn’t in it.

“I didn’t really want to be there until four in the morning.”

Before the final, Andrew and Armando had already agreed to split the prize money.

“We got on really well and he’s such a great dude, I didn’t mind if I won or lost to him.”

Andrew stayed in the US for a few weeks to travel. He went to a Donkey Kong competition but failed to make the finals.

He returned to New Zealand earlier this month and agreed to meet me at Timezone. I wanted to see him play.

But the Galaga machine wasn’t cooperating.

I asked him if we should ask the worker at the desk to turn it on for us. He didn’t look fussed.

Later, as we sat in a small cafe next to Laserforce, Andrew told me the game wasn’t fun for him anymore. It’s just work.

“When you’re grinding out scores it’s a bit boring because there’s nothing to figure out. It’s more about endurance and concentration.

“But it was fun going to the competition and being among friends.”

He told me he already had, but on an emulator. In other words, not on an official machine.

“But I will try and break it eventually,” he added.

And how does it feel to be a world champion?