Allegations and counter-claims in a crisis. 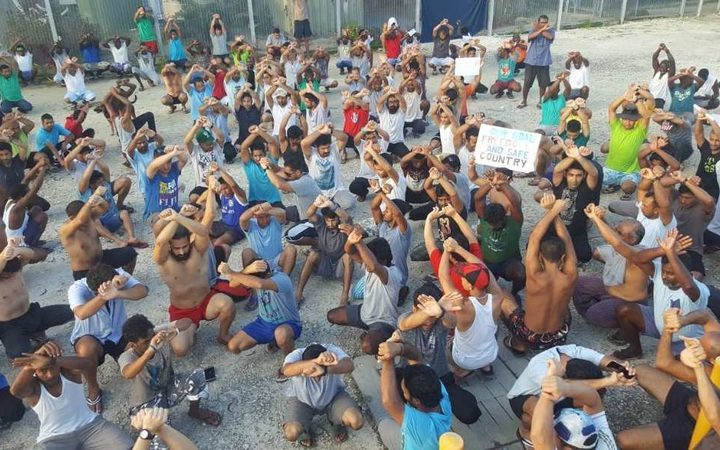 Eight incidents of violence, threats and illegal behaviour were recorded each day at Manus Regional Processing Centre. This is a claim by a former guard, a New Zealander who wished to only be identified as Ian.

“We know what these people are capable of, we know there’s footage on hard drives that they’ve got of child pornography, etcetera. They are not the calibre of people you want to come into a country and try and re-establish themselves,” he told RNZ.

About 400 refugees are refusing to leave the camp on a remote island off Papua New Guinea since its closure two weeks ago, despite food, water and power being cut. They say their safety is at risk if they move to transit centres.

They are fearing for their safety for a very good reason, they are the ones that have caused all the problems in the local community.

The Manus Island centre has been used to detain thousands of refugees since it opened in 2001. There were several hundred people held there until it was officially closed on 31 October.

New Zealand Prime Minister Jacinda Ardern has let the Australians know that an offer (first made by the National-led government) to take 150 refugees from Australian detention facilities is still on the table.

Ian, who worked at the centre for 18 months and lives in Australia, said the NZ government’s proposal was “diabolical”.

“The people who have transitioned out to the community, quite possibly not a problem - but the ones that remain would be a major issue.

“They are fearing for their safety for a very good reason, they are the ones that have caused all the problems in the local community.”

He said guards wore cameras which recorded violence, threats and verbal assault, and he was in charge of documenting it before passing it to authorities, along with a “mountain of paperwork”.

“These people are hiding their criminality behind loss of documentation, and if she continues to push the issue I would not be surprised if Malcolm Turnbull slammed the door on New Zealand.”

If the refugees were able to come to New Zealand and gain residency, then they would be able to move to Australia.

Refugees on Manus Island have hit back with allegations of torture and intimidation by guards.

Kurdish journalist and refugee Behrouz Boochani told RNZ that at the centre it was a case of criminals guarding the inmates.

"Those people who have been here working in the Manus prison camp - I am not going to say all of them - but most of them are criminals because they have been a part of this systematic torture than they have been violating human rights in this prison camp."

"These people who worked here for security, they were involved in torturing us in any way they could do. Two of [the staff here] were involved Reza Berati 's murder … they are criminals and they are the ones who should receive justice and should be tried for the crimes they did to many, many people on Manus Island.

"I am sure that one day when we get to leave they will ask the people who suffered and the people who were tortured here will testify for the torture Australia deliberately did on them."

Sudanese refugee Abdul Aziz Adam said extreme vetting by the United States had not exposed the criminality among the refugees.

"So far 350 men have done their process with the United States authority, some of our friends who have been accepted as refugees, some of them flew to the US and the rest are still waiting to go [there].”

I am sure that one day when we get to leave they will ask the people who suffered and the people who were tortured here will testify for the torture Australia deliberately did on them.

Two motions introduced in Australia's parliament by the Labor and Green parties, and passed in the upper house yesterday, call on Turnbull to approve the New Zealand proposal.

But Turnbull is refusing. This month he rejected the refugee resettlement, preferring instead to work through an existing refugee swap deal he negotiated with former US President Barack Obama last year.

Under the US deal, up to 1250 asylum seekers detained by Australia in Papua New Guinea and Nauru in the South Pacific could be resettled in the United States in return for Australia accepting refugees from Central America. So far, the United States has accepted only 54.

Meanwhile, New Zealand has pledged to give Papua New Guinea and aid agencies up to $3 million to help care for Manus Island refugees.

Prime Minister Ardern said officials from both countries were working together to establish a screening process that could be quickly put in place if and when Australia accepted the government's offer to take 150 people from Manus Island and Nauru.

"Our officials will continue to work closely with Australian officials so that we are prepared in the instance that Australia will take up that offer.

"That is more progress than we've had on the offer in a number of years."