A woman in the world of full metal combat. 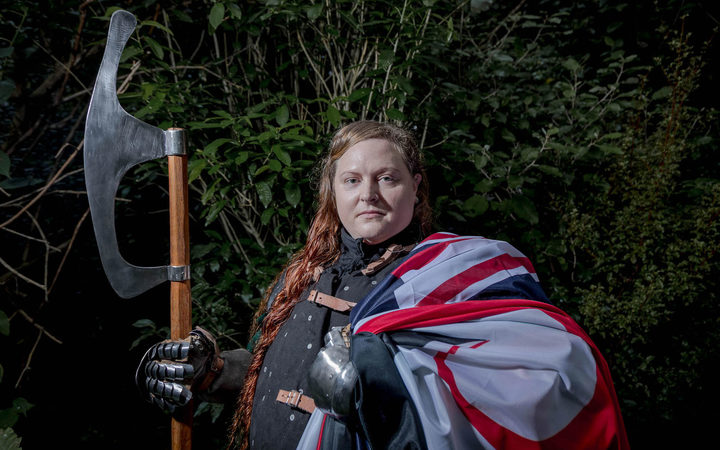 Few Kiwi women can say their favourite sport involves hitting their friends with an axe.

Or that they own a suit of bespoke steel armour, weighing close to 40kg.

Or that their sport will take them Europe, to fight in an arena where women were traditionally banned.

Dayna, from Upper Hutt, is trained in the resurrected art of full contact medieval combat, also known as “full metal combat”. This week, she arrives in Denmark, along with athletes from 28 countries, to compete in the International Medieval Combat Federation (IMCF) World Championships.

On Thursday evening, she will fight in the women's poleaxe event, against veteran combatants from Europe and the US.

Dayna's weapon of choice is a bardiche: a 2m long pole with a cleaver blade at the head, a popular implement for non-mounted combat in the 12th century. And executions.

Medieval combat, both historically and in its recent renaissance, has been the domain of men. In fact, some of the first 21st century leagues actively excluded women from the fighting ring.

But times are changing. And, in New Zealand, Dayna is a pioneer. She will be the third female fighter to represent New Zealand on the international field - and hopes others will follow.

"As a woman fighter, I'm pretty rare. I get some double takes," Dayna says.

"But, for me, it's important to be a prominent female fighter.

"You can't be what you can't see - other women won't aspire to be fighters if women like me don't make ourselves visible."

Dayna, a self-employed mum-of-one, first found her passion for fighting in 2001 - while coping with a traumatic breakup.

A medievalist friend suggested she try re-enactment fighting - acting out famous battle scenes - as a positive outlet. She joined medieval re-enactment guild Company of the Dragon, and was hooked.

I wanted a new goal - one that was physical. I wanted something completely physically exhausting.

Re-enactment battles are often choreographed, and players will lightly tap the opposing side to create the illusion of swordplay. Full metal combatants will use their weapons to deliver crushing blows - to send their opponent crashing to the ground.

"In re-enactment, for example, if you're playing a Lancastrian at the Battle of Tewkesbury, you pretty much have to lose. In full metal, you want to incapacitate your enemy and win.

"You go full tilt - you don't pull your blows. You go hell for leather".

Dayna set herself a "BHAG - a Big Hairy Audacious Goal" to try full metal Ccombat, and improve her fitness. In November, she joined Felag, a Lower Hutt-based combat club.

"I wanted a new goal - one that was physical. I wanted something completely physically exhausting."

Inspired by world champion fighters Rachael Forest and Sophie Moore-Stockbridge, both from Wellington, she made it a goal to represent New Zealand in her sporting field.

In February, she fought at the New Zealand Full Contact Medieval Combat

Pacific Cup in Levin, battling two male champions - and qualified for the

Full metal combat, originating in Eastern Europe in the early 2000s, has roots in the grand melees of the 12th century jousting tournaments. There teams of knights would clash in a mock battle, using blunt weapons - sometimes even fighting to the death.

In full metal combat, fighters can participate in one-to-one matches, or in teams of up to 16, and can specialise in sword and shield, longsword or poleaxe.

To cushion the body against such force, competitors wear several layers of protective clothing, including their armour, which must enclose torso, limbs, head and hands. 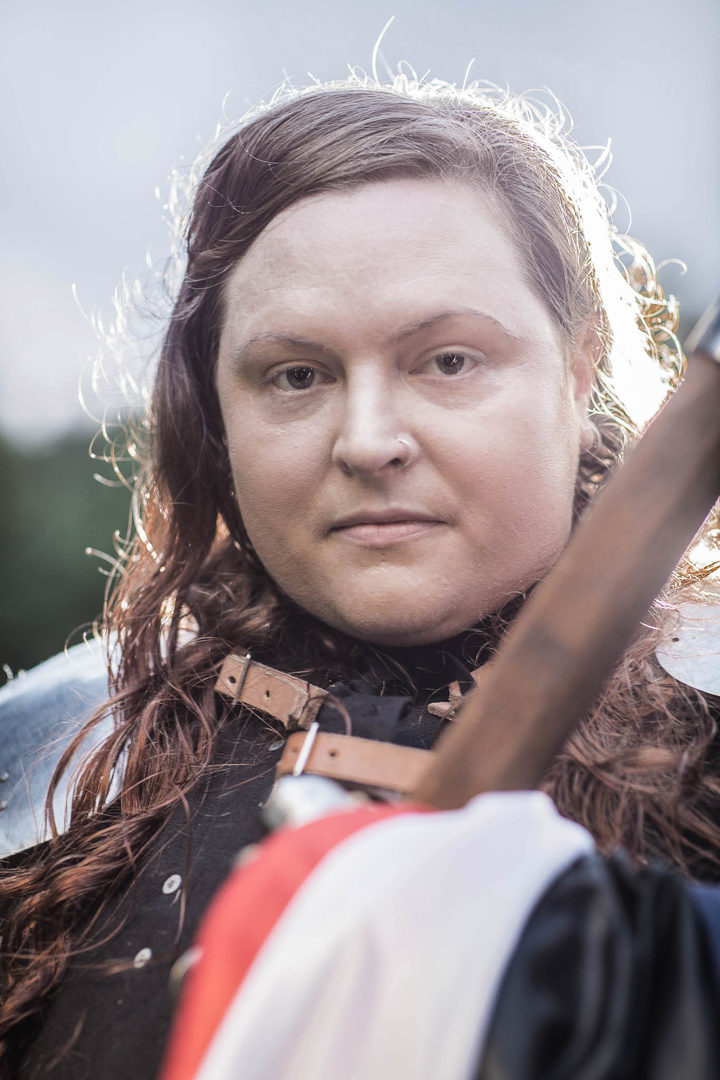 Dayna is in her element when wielding her axe. Photo: Keane Chan

Dayna's fighting garb hails from around the world. Her first layer of protective padding, usually worn by American football players, is made from non-Newtonian fluid, which turns solid when struck.

On top of that, she wears a gambeson, a padded jacket, made in Ukraine. Her armour travelled a shorter distance, from All Fired Up armouries in New Plymouth. Consisting of a Brigandine, a cloth vest lined with steel plates; and a Great Bascinet helmet, similar to that worn by Henry V in the Battle of Agincourt, the armour weighs a hefty 35kg.

"Under all that, I'm easily 7 or 8cm rounder," Dayna, who has a squire to help her dress before the competition, says.

In a match, fighters spar for three rounds of 60 seconds - which, under all those layers, "feels like an eternity".

"In the movies, you see these guys in armour with endless energy - but really, you get pretty pooped. You have to get out of the way of someone coming at you with an axe, with an 35 extra kg on you.

"You're swimming in sweat by the end."

Despite the discomfort, Dayna is in her element when wielding her axe.

"I love fighting. I love the physicality - the darting around your opponent, that feeling in the heat of the moment when you're about to take a swing. It's the adrenaline; the sheer joy of movement.

"You feed off the other fighter as well. It's like a dance - you've shared a very intimate experience."

She also enjoys the mental stimulation - approaching each foe with a new strategy.

"No plan survives contact with the enemy, So, you modify your fighting style. Brute strength doesn't always win, as someone can always out-dodge you.

"Your helmet is like a sensory deprivation tank. You can barely hear, and you've only got a narrow space to see out of. You have to figure out where their weapon is coming from, and anticipate their next move.

Dayna says preparing for Denmark has been "draining". She's been doing daily gym sessions, and has stuck to an eating plan. She and her teammates have thrown themselves fundraising for the trip - covering everything from equipment (Dayna's armour alone cost a cool $5000), to flights, to overweight baggage costs.

Fighting is aggressive, and women are automatically put in that nurturing role. But I'm very clear - I'm not here for the dancing, I'm here to fight.

"It's not cheap; it's like equestrian, minus the horse."

One of the biggest mental challenges, she has found, is simply being a woman in a male-dominated sport.

“The men treat you with a bit of reservation at first - you're a novelty.

“When you're at a competition, people assume you’re part of the support crew.

“Fighting is aggressive, and women are automatically put in that nurturing role. But I'm very clear - I'm not here for the dancing, I'm here to fight."

With so few New Zealand female fighters, Dayna is often in combat with men - though many feel uncomfortable with hitting a woman.

"But I've found that once you prove yourself on the field, they'll open up.

“It's just what we're up against - and it's frustrating. But if someone doesn't want to fight me, that's fine. I'm coming to compete, whether they like it or not.”

She says another significant barrier for women fighters is the cost - especially considering the gender pay gap in many countries.

“They had their traditional views. But women were showing up and wanting to fight."

She says female participation in the IMCF has grown exponentially.

Ahead of her first international fight, Dayna feels "determined and resolved".

"Of course I want to win. But if I come last, I'll be ninth in the world. And that's awesome."