Something has to change, doesn't it? 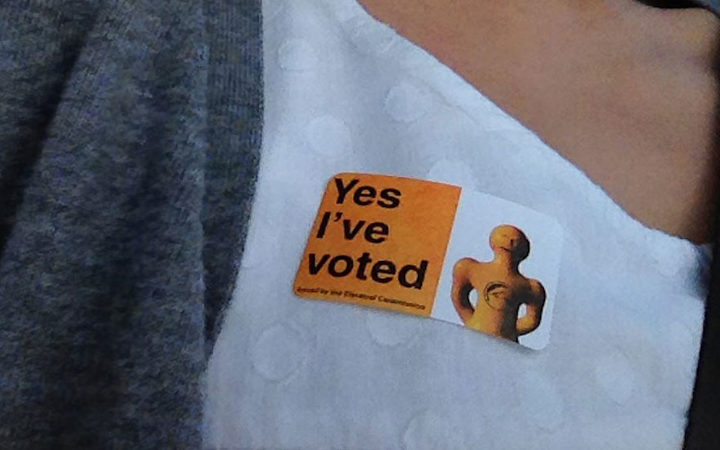 Only at 65 percent of voters aged 18-24 are enrolled to vote in the upcoming election general - and in the previous two elections turnout has hovered around 65 percent.

Some people don’t vote because they feel they don’t know enough, they don’t trust politicians, or they just don’t care.

A new group called Active Citizenship Aotearoa thinks they can help turn those statistics around. Peter McKenzie, one of the group’s founders, shared his take on what needs to change.

What has eroded away that willingness to vote?

I think that combination of a lack of active citizenship education in schools - which showed people the opportunities that were open to them, the ways they could engage in the system to get change - and also the perceived “well off-ness” of a lot of students has meant those students weren’t so keen to get involved.

And then for the students who are worst off, the about 12.8 percent who are not in education, not in employment and not in training, there’s just no reason to get involved in a system they think is letting them fall through the cracks.

It’s really dispiriting to think that you’ve got this whole weight of poverty and helplessness on your shoulders - and now you’re expected to get out into a political system you don’t understand and try and effect change.

Do you think a lot of young people feel like the system is rigged against them? There’s rising cost of living, not only buying a house but also renting in the major cities. We’re seeing students working multiple jobs on top of getting their student allowance to get by.

We think it is possible to engage with the system proactively and affect the system, whatever your political beliefs are, to try and change the system to better reflect those beliefs.

We’re trying to make it easier for people to do that by getting civics education in schools and outside of schools.

What would you like to see in schools? Do you think it should be how it is in the US, with elections for class president?

We’re not big fans of the class president thing. If people want to do that, that’s all good. We already kind of have that with the head prefect thing.

What we think is better than mock elections is a dedicated unit or dedicated class where people can learn what it means to be an active citizen, learn what opportunities are available to them and have that continue all the way through school.

And do you see that being compulsory?

Yeah, absolutely. A lot of the people we talk to call it a “How To Adult” class because a lot of people would like to tag on to that how to do taxes and how to get your driver's licence - things that aren’t being taught at home or in general life and as a result are falling through the cracks.

We think it’d be really positive to have that major focus on citizenship and then, if we can, tackle some other things later on.

So, are you aiming to get political parties to adopt this as part of their campaign platform?

We’d love that. We think that there are a whole bunch of political parties that are already doing it - United Future is one, Labour is another.

There was a parliamentary select committee a while ago chaired by Peter Dunne with MPs from across the political spectrum and all of them agreed that a citizenship class would be a good idea. The only exception, I think, was David Seymour.

So, we think the only political party that doesn’t agree with this is ACT, and we think that we can convince them.

If everyone agrees with it, why isn’t it happening?

People get really lazy - we just don’t think it’s been a matter of discussion. It hasn’t been something that political parties focus on because it’s an important issue, but not a pressing one.

We think it’s really important that we bring it into the national discourse - allow a conversation about it - so that hopefully all of these political parties can recognise the importance of involving youth in the system.

What inspired you to get this group going? What made you decide to be such an advocate for active democracy?

I’ve been incredibly lucky over my life. I got a scholarship to Scots College which, otherwise, I wouldn’t have been able to attend and through that I was able to make the most of a whole bunch of opportunities.

I was the captain of the New Zealand Schools debating team, Annette King’s youth MP, and head prefect of that school.

The voting rate at the last election showed about 40 percent of eligible young voters decided not to exercise that right. How do you reach those people?

You’re obviously fully engaged, but there are a bunch of people out there who aren’t engaged, so how do you do that outreach and actually convince people that this is something that’s important to them?

What’s worth noting first of all is that there was this massive study called the international civics and citizenship study in 2008, which covered 38 countries. When it came to New Zealand, 84 percent of the year 9 students who were interviewed said they intended to vote, so we’re seeing a decrease between that 84 percent and the 62.73 percent who actually voted - a decrease of 22 percent.

We think the interest is there, it’s just a matter of accessing them. What a lot of youth advocacy groups do is they are quite limited in their outreach, so we’re really interested in going to South Auckland, going to Porirua, which is where our first summit is going to be, accessing students who aren’t usually reached out to, and making sure that the people who are interested have the tools to return to their schools and engage their schoolmates.

What changes do you think are needed, other than civics education? Do you think we need to lower the voting age?

Broadly, we think there are two other policy options that could be made to address the issue.

One: lower the voting age from 18 to 16, and two: the introduction of online voting.

Even at a local body level, we think it would be incredibly beneficial to have online voting - it would allow the access of a whole, wide swathe of youth to get involved.

Also, If we had civics education in schools, when you’re lowering the voting age to 16 or seventeen you’re accessing that last cohort of students just before they leave school so that on election day they’re still at school and they can be supported by the civics class and staff at the school.

Do you think politicians have enough policies to make young people feel like there’s someone out there for them to vote for?

Totally. We think that there’s a breadth of political opportunities. There definitely is a spectrum of options for youth to choose from.

It’s a little bit misleading to assume that there are certain policy options that only youth want, that there has to be a special youth policy for youth to be interested in a political party.

We absolutely think that if a political party isn’t doing a good enough job and isn’t making outreach to youth and actually supporting youth and the issues they’re going through; like the housing crisis.

We think if there was a greater youth turnout, political parties would have a greater incentive to address those issues.

What happens if more young people don’t start voting and the turnout rate stays the same or keeps on declining? What does the future look like then?

When fewer and fewer people of all ages vote it’s only the people on very extremes or people who really, really care about one certain issue, or people who probably aren’t the most productive for any political system who stay behind. We think it’s really important for everyone in our society to vote so we get a holistic picture of what society wants.

When youth voters are completely out of the system political parties can’t learn from them at all.

So you think things are changing, and political parties are paying more attention to young voters than they have in the last couple of elections?

Yeah, definitely we think that there’s a real wave of interest in youth politics and youth engagement in politics. We see that in Max Harris’ new book and his advocacy of engagement and we can see it in just the general behaviour of politicians.

I attend Victoria University, and the number of politicians who will come through the hub and say “hi” to people and make an effort to engage regardless of their political stripes is really amazing.

Interview edited for brevity and clarity.