Creating some kind of heaven. 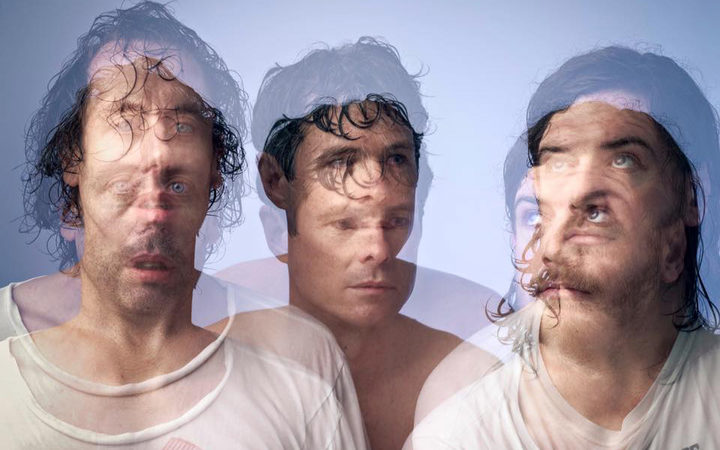 Glass Vaults want their new album to be a euphoric experience.

We asked the band to break down the album track-by-track.

At the time we wrote this song we had a studio on Willis Street in Wellington, an old six-story building. It had lovely high windows. Because it was about to be pulled down we had a lot of freedom there … and the rent was cheap!

This song began life with a synth loop that Rowan had made, which was then worked on together in our rehearsal studio. Initially the loop had a big siren sound through it which I really liked, but as we developed the track the original loop wasn’t needed anymore… we were all about stripping songs back to the essentials at that time.

Lyrically, it was inspired by the content I was consuming: Patti Smith’s Just Kids, The Smiths’ Strangeways and Here We Come, Roxy Music’s Flesh and Blood and Paul Simon’s Still Crazy After All These Years were on high rotation for me. I was also having the most intense dreams during that time. - Richard

The lyrics in this song are about school children and lunch time adventures in the playground. I was working as a primary school teacher at the time and the original idea for this track came from a song I was working on with my students. Benny’s line, “I feel this time, I feel the time, like I felt this once before”, which comes in later in the song, was a magical thing to watch in the studio. We did all the vocals for the whole album in one day and by the end of it we were definity struggling. - Richard

I think the tone of this track really encapsulates the culture we had created as a band and as a group of friends. From the first conception of this track it had all the joy that the final version does.

When we returned home from New York in 2012 I had a dream that I was back in Brooklyn, it was nighttime and my girlfriend at the time was there. It’s also closely linked to a picnic me and Rowan had with our friend/mutual crush Emma Jo, on top of her roof in Brooklyn with a view of Manhattan.

I was listening to a lot of Crowded House at the time and we were touring up to Auckland regularly as a band. I really liked the idea of creating a song for the “classic New Zealand summer” and this song always reminds me of that Fruju ice block which ran in the ‘90s in New Zealand… the one with the beautiful young people jumping off a yacht, eating ice blocks and singing “Ooh Aah!” - Richard

I was listening too Wings’ ‘Band on the Run’ a lot at this point, and I loved how that song changes so many times throughout it course. I wrote the intro, verse and chorus to this song at different times and thought that they might become three separate songs but instead I tacked them together as one song. - Richard

The whole mix process for the album entire took over 1000 hours. I really enjoyed spending time with each element, a week or two with the kicks, then a week with the snare. The vocals were mixed syllable by syllable and I probably spent a month on the basslines.

I wanted the sound to be psychedelic and euphoric without using time modulation effects, phasers/flangers. I started messing with transients of sound quite a bit and found that the audio would make me feel prickly when I accentuated certain transients and frequencies. Then I used a lot of tremolo, panning, just being specific with frequencies and which part of the dynamic of the sound was being effected.

I didn't want to use any compression and spent a lot of time trying not to use any plugins at all. There was no reverb on the album for a year until I finally caved in and used some. I had imagined the songs sounding flat and plain and that's what I would always say 'plain' not overly anything, so not overly reverb or roomy, or overly compressed, overly bright, overly bassey, a sound that would be quite coy and maybe mysterious and seductive. Something that would be dense and warm and that you could sink into over time.

Once I had the plain sound sorted I moved onto making the sound more seductive by messing with transients, panning, short slap echoes, vary frequency dependent/restricted. - Bevan

This song was originally released on the album with the same name in 2015. The first song I wrote on a new guitar I bought in New York in 2012. I like to think of this song as an ode to Paul Simon’s Graceland, which I was obsessed with at the time.

Our record label was really keen to include it on this record and after some compromise we obliged. It was written in the same house as ‘Brooklyn’, a great loft place on Wakefield St in Te Aro, so there is a connection there. Rowan’s synth parts in this track always stood out to me, they sound more like brass instruments layered in the mix. - Richard

One of the methods we used when trying to go as dry as possible with the sound on this record was with the drum tracks using these things called Cymbomutes. They're actually made to use for rehearsing in your bedroom so you don't make any noise. You slip them over the cymbals so that they don't resonate at all. When you hit them you just get a “tink” with no splash.

We really pushed our drummer Hikurangi in that direction and sometimes it was a little touchy, maybe verging on strangling his performance a bit but we really wanted to push deep in that territory. It was cool he was so open to it and trusting even when Richard and I weren't sure how it would turn out.

We just trusted in Bevan's direction on that one haha! It's cool in the end. It almost has a feel close to an 808 or 909 with very short and sharp hi-hat attack and decays. - Rowan

This is one of my favourite songs that I have written. I love the chord progression and the slow sexiness of it. This song is unashamedly about falling in love. - Richard

Falling in love, you say? To me it sounds a bit more… corporeal than that. - Hikurangi

In this record the idea of working as dry as possible, without reverbs and extensive delays came through Bevans lead, in response to the music Richard and I were getting really into at the time like ‘80s New York vibe, Talking Heads, Tom Tom Club, Grace Jones.

Though the recording and writing process we discussed the idea of a very ‘dry’ sound album. This started to open up the possibilities of referencing or emulating techniques used in Autonomous Sensory Meridian Response.

Like in all the music we have made as a band there’s an element of euphoria or seductiveness that we like to try to encapsulate or present. In this new territory of no reverbs or overwhelming spatial effects this was an intimate and exciting way of approaching it. With the totally dry sound as a base individual instruments have their own weight and signature in the mix. We wanted something with personal character and a certain intimacy to it, especially when listening with headphones.

By pulling out extensive atmospherics like reverbs we could play with strengthening the groove and playing with the perceived proximity of things like vocals and percussion. Benny has such a sensuous voice and some of his vocals end up feeling so close that they're tickling your ears, like in the title track, 'The New Happy'. - Rowan

I wrote this track on guitar late at night alone in our studio. I loved writing this song, it was fun looping all the parts live as I often do when writing. The narrative talks about a character returning home after a journey, changed. A character farewelling and celebrating an old relationship/ experience/ journey/ bleached by the sun, but optimistic.

The chorus especially tries to reflect and celebrate on these ideas. There’s an aggression to the way I sing it. I’m not sure why but I take pleasure in that.

The percussion takes were super fun to record! Bevan let us just shake and tap stuff all throughout it, we did a whole bunch percussion stuff as well as some awesome conga jams with Mikey Trujillo.

My favourite part of this track though is Bevan's bass line. It’s so propulsive and groovy, and he always leaves you wantin. I just hook into that every time. - Richard

I approached the record as a producer. Because I've worked with Row and Richard a lot we have a lot of trust and love and I talked with Rowan a lot about how I wanted the album to sound. They were nice enough to let me drive the process of sculpting it's sound. In rehearsals I talked with Hikurangi, the drummer, about how i wanted the drums flat and dry and how this might be kinda boring and annoying.

I didn't want any hi hats on the album. I wanted percussion everywhere. I wanted only synth bass.

I think i apologised to Hik a lot, he's a super good drummer and I felt kinda mean in restricting him but it was important to the sound. Once the drums sound good, and i knew the vocals would sound good because of Richard and Ben being great singers, then the album is 50-60 percent there. - Bevan

This is one of my favourites on the album. The boys made a really amazing cowbell sample for the demo, which I did my very best to replicate in the studio. It was hard and I actually prefer the demo sound in a lot of ways. This album has a Talking Heads vibe to my ear, and ‘Bleached Blonde’ in particular has a real ‘Road To Nowhere’ thing about it. When we play it, we get to focus on the hypnotic quality of the beat and the way that repetition creates tension and build. - Hikurangi

One of the older songs off the record, written while on tour in Auckland, in the back garden of a flat we were staying at on K’ Road, over the fence from Coco’s Cantina. It’s love turning you gaga, for better or worse. - Richard

Another favourite. I find myself playing these Purdie shuffles in a lot of what I do, but it actually mellowed out and became more of a processed, electronic-sounding thing. It reminds me of a song called 'Tritone' which I did a few years ago with a wonderful and talented friend, Canadian singer and violinist Mika Posen’s project Merganzer. - Hikurangi