Photographer Chris Corson-Scott shares what these locations say about our environment. 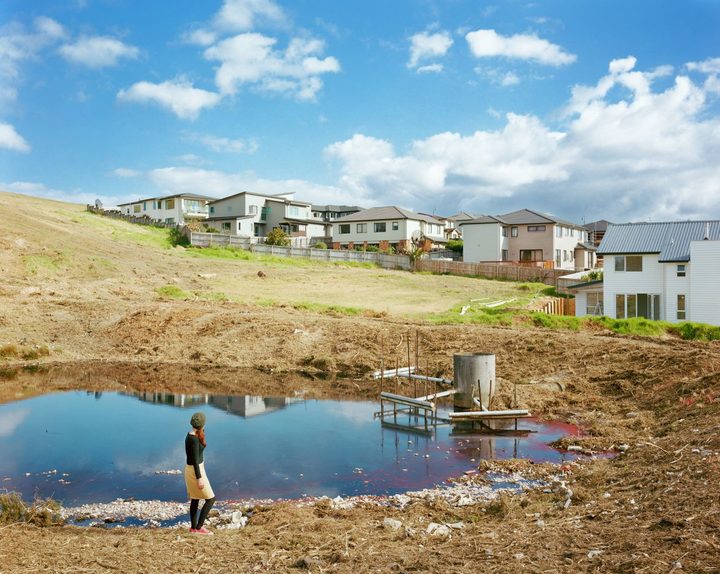 Most of your work focuses on isolated parts of New Zealand. Why did you turn your lens to this site on Auckland’s urban fringe?

My early photographs were in Auckland's central suburbs and following that I looked at the city fringe which by then the 'special housing projects' were rapidly expanding.

I photographed that scene and others like it because I have very mixed feelings about what's going on there and the ideology behind it. Peak oil is real and so is climate change. In light of that I find it deeply upsetting that we still continue to hurl finite resources at a 1960s utopian hallucination of car dependant suburbia and infinite consumption.

The Auckland housing crisis (and the neo-liberal capitalist ideology in general) is like being hostage on a huge train headed for a ravine where the bridge has been washed away. The radio is blaring over and over “The bridge is out and the river is in flood, stop the train!” but the drivers can't hear it because they're at the back of the train robbing the bank car.

What impact has the Auckland housing crisis had on you?

Fifteen or less years ago houses on the street where I grew up in Mt Eden could still be had for under $200,000 and the area was inhabited by a diverse range of people. Now the same uninsulated bungalows would be a speculator's dream at $1.5 million and the street is mostly bankers, advertisers, and a general smorgasbord of people who have devoted their lives to making money with money.

The teachers, nurses, writers, and artists who used to live there couldn't afford the increasing rates years ago and have accordingly been redistributed somewhere more pleasing to the gods of gentrification. Meanwhile, another 100-year-old Kauri or Pohutukawa gets chopped down to make way for concrete front yards blocked by double garages to house the SUVs and vulgar walls with electronic locks to keep the baddies out or as domestic monuments to a vague feeling of malaise toward everybody.

CONTROLLED MINE BASE ON RANGITOTO 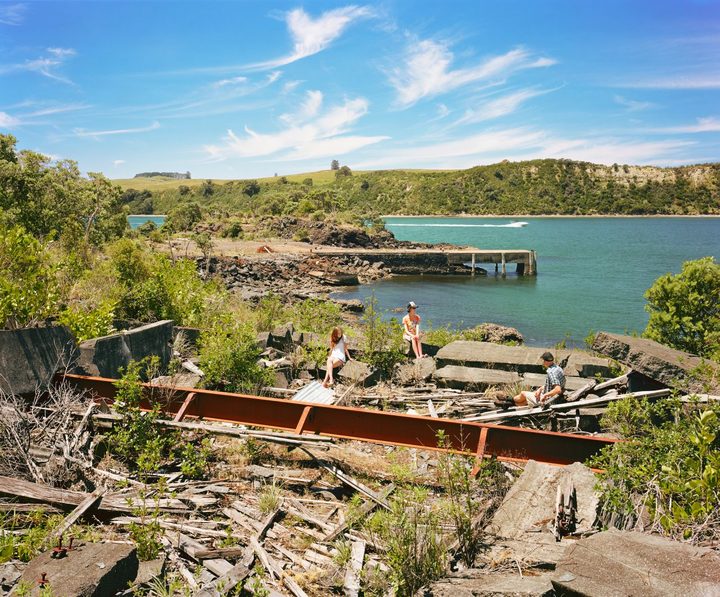 The controlled mine base on Rangitoto Island. Photo: Chris Corson-Scott

This photo looks like an idyllic summer scene, other than it being amongst the broken concrete. What is a controlled mine base and what do you know about this one?

It was built during World War II as a base to control underwater explosive mines placed around the greater Auckland Harbour as a defence against the threat of invasion by sea, and at one time over 100 soldiers were stationed there permanently. In the 1980s the base and most of its structures were removed leaving only the broken concrete foundations, fuel tanks, huge piers, bent steel, and a hell of a lot of smashed asbestos roofing tiles which is the main reason people are not supposed to enter the site and why involved conservationists want every trace of the site removed.

Archeologists and the owners of most historic sites I've encountered in making my work often complain bitterly about the rate at which we have recently destroyed our industrial heritage in the name of tourism and compliance with absurd health and safety regulations.

For sites like this, health and safety literally specifies zero trip hazards, flat grassed surfaces suitable for picnics, and not a single loose scrap or brick small enough to be moved. And of course every raised area needs to be fenced and every hazard needs an individual warning sign right in front of it.

The whole thing is a kind of revisionist history crusade, and when that ideology is combined with a platoon of benches, toilets, kiosks, and “interpretation panels” directly in front of everything.

In my opinion the end result is cultural and historical vandalism.

There are plenty of bunkers and general defences around the Hauraki Gulf like you also see around Wellington, Christchurch, Dunedin and other places, but this site is relatively unique within New Zealand largely because even after the removal of buildings what remains is still very authentic. 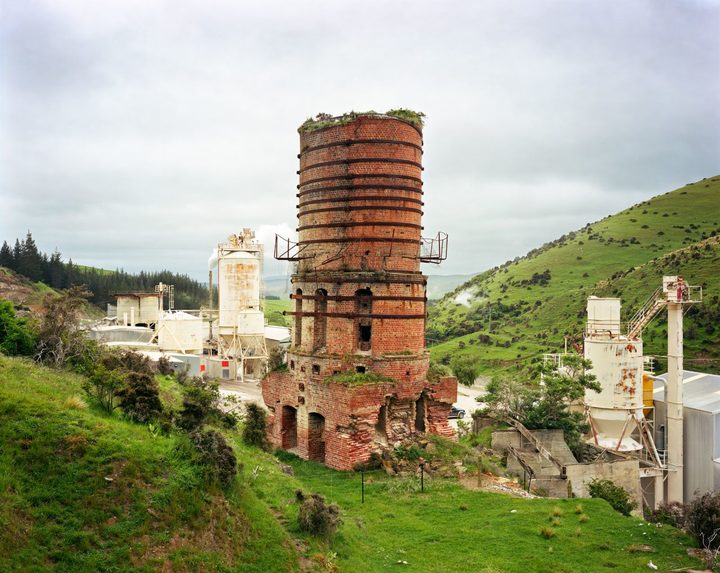 How did you find the kiln at Makareao?

The general answer is that it's part of a larger project I've been doing over the last few years trying to find the most interesting sites like this in New Zealand. The specific answer is that there were a few intriguing close ups of it in a great book from the 1970s called "New Zealand's Industrial Heritage" which made me want locate the kiln and see if it was still standing, something which seemed impossible as nearly everything else in that book is now gentrified or destroyed.

What do you know about the history of the area?

The kiln is the major remnant of a large limeworks that dates back to sometime around 1900 and it's usage stopped probably a few decades after that. The location is still in use as you can see from the more modern background, and is particularly interesting to me because the whole complex has continued to be modified and adapted like an industrial version of natural selection.

Has there been an effort to preserve the tower, or is it just being left to crumble?

It has a category 1 classification on the Historic Places List which is the highest, in that it doesn’t allow any modification or demolition. Of course that does nothing against weather, gravity and neglect. In reality, there is little money for the protection of such things and I have been to plenty of category 1 sites that have only recently fallen down or are in the process of doing so.

I guess there is also the question of whether it's better to constantly repair such places in an attempt to suspend time, or whether they say more and are more useful to us if time takes its natural course. Ironically, in this case the best protection has been its location in a high security mining operation, with all the safety regulations that apply to those places, and have stopped anybody from interfering with it.

CLIFFS AND ROCKFALLS AT AWHITU 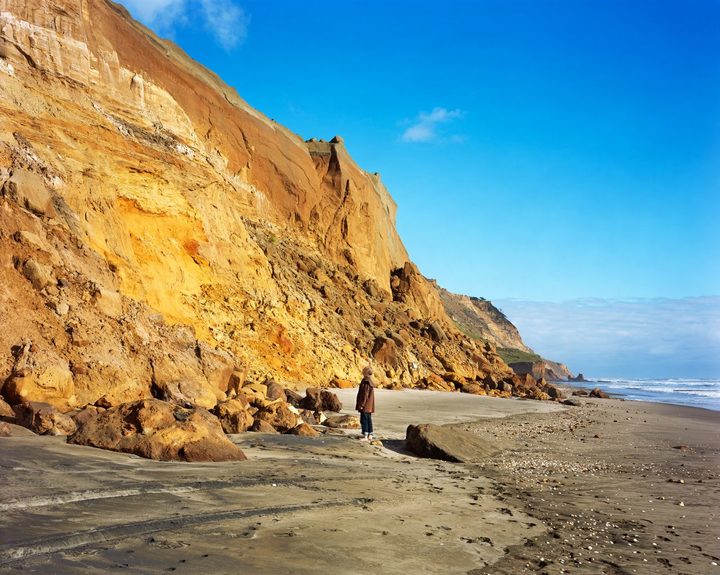 Tell me about what I'm looking at in the photograph – how did the rocks come to crumble away and who’s the person standing at the bottom of the cliff?

The place is the general location of a very early Māori settlement and large garden site on the Manukau Harbour southwest of Auckland. At one time the gardens stretched kilometers to the west on land that has since been the swallowed by the ocean.

The person is New Zealand artist and photographer Mark Adams who among other projects has spent the last 40 years photographing the relationship between Pākehā and Māori and the key historical sites of this interaction. Like him, I also shoot film with an old 8x10" view camera, and more importantly his work and thinking has been a large influence on mine and the emerging generation of New Zealand artist photographers in general. On that day we were out taking photographs together and I thought it felt right to have him in this image.

What does the photo say about how New Zealand’s coastal landscape is changing?

That like any island nation or most major developed cities in the world which tend to be coastal, we are at the mercy of the sea, nature in general, and ultimately time. Think of Carl Sagan's cosmic calendar where January 1st represents the beginning of the universe with the big bang and human life doesn’t appear until 13 billion years later in the last hour of the 31st of December. Our known history appears even later. Everything we know is a cosmic blip, and though our evolved brains give our situation the feeling of permanence and inevitability it is likely a hubris which we share with the multitude of other cultures which have vanished before us.

*Chris's photographs can be seen in Chris Corson-Scott: We Passed the Setting Sun at Photospace gallery in Wellington as part of the Photival and Fringe festivals till March 18, and at Christchurch Art Gallery in The Devil's Blind Spot: Recent Strategies in New Zealand Photography till March 12.