Having a crack at beggars is much easier than addressing the root causes of poverty. 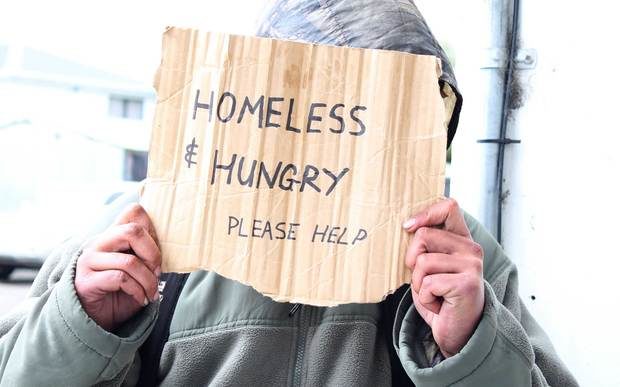 A person begging on a Christchurch street. Photo: Katy Gosset/RNZ

Sir Bob Jones is right, to some extent. It is “a disgrace in a modern society that… people are lying on our streets of our city begging”.

What he misses, though, is that the growth of street level begging is very much a consequence of the values, policies and laws, which characterise our "modern society", as he puts it.

Where he could’ve used the platform his voice is provided as an opportunity to bring attention to begging by asking how and why, Sir Bob chose to tow the tired old line of blaming the poor for being the cause of the poverty we’d rather not see.

I’ve recently been doing research exploring the daily lives of people who are, or have recently been, living on the streets in Wellington, and many of the people I met grew up in situations where their pathways to prosperity were severely limited.

Sometimes people made the good money you hear about in the media, but by and large these figures are exaggerated and infrequent for the majority.

Some of them, since living on the street, took up begging to get by with a degree of shame, regularly informing me that they hoped they at least gave people the satisfaction of feeling good.

Ironically, it was often the people who had been housed that ended up begging. One of my participants, who moved inside during the course of my research, applied for multiple jobs, but was turned down due to convictions he accumulated while living on the street. Struggling to cover his expenses on the benefit, and his hope of gaining employment looking increasingly unlikely he reluctantly took to begging.

Sometimes people made the good money you hear about in the media, but by and large these figures are exaggerated and infrequent for the majority.

As a society, we need to think about how and why begging has become a viable option for many, not vilify already marginalised people, condemning them to a life of stigma.

It’s much easier to have a crack at those without a voice, those without the cultural, social or legal resources to fight back, then it is to address the root causes of poverty. The latter may unfortunately require acknowledging that there are certain elements of our systems, which unfairly enable some of us to get ahead, at the expense of others. Others, who I’m sure, do not fit within the contours of "our streets" or "our city", as outlined by Sir Bob.

Not satisfied with solely deriding New Zealand-based beggars, he also takes aim at European gypsies for using "little girls", a symbol of purity in the eyes of most affluent Westerners, to will pennies from him, stating that the appropriate response to this kind of behaviour is aggression. Who knew that a wealthy white businessman enjoying a holiday in Europe would feel it necessary to intimidate a persecuted ethnic minority for trying to make a livelihood?

What Sir Bob demonstrates here is, at best, a profound ignorance of the reasons certain groups of people are predisposed to poverty as well as the historical, political and cultural factors influencing their contemporary trajectories, and at worst, a cynical and strategic move designed to foment contempt towards the underclass and stigmatised segments of society for bringing shame to hardworking, middle-class people. The logic being that if these people on the street had of worked hard enough and made wise decisions like the rest of "us", they wouldn’t be bothering us with their current predicament.

When Sir Bob identifies that beggars are generally "fat and Māori", he is seeking to separate them from the majority of middle-class Pakeha. He taps into anxieties that they are being unfairly burdened with carrying the load of others, different from them, who are unable to take responsibility for their own livelihoods.

But this doesn’t account for things like the ongoing impact of colonialism on Māori, of deindustrialisation on large swathes of rural communities, the well-documented health impacts of living in poverty, or increasingly precarious work and living environments. Nor does it address discrimination in the housing and job market, or racism in the criminal justice system.

I was almost reluctant to address Sir Bob Jones, for fear of feeding his ego, but the fact is we need to expose people like him for what they are, and the messages they present as the fallacies they are. He is a wealthy, white businessman who is afforded a platform to voice his opinions that most of us are not. As a result, his power to shape public opinion is vastly increased, and he has leveraged this to his advantage many times over the course of his career.

Make no mistake, it is a move that directs our attention way from addressing the real causes of urban poverty, which may reveal some ugly truths about the prosperity some of us enjoy and would like to continue enjoying without disruption.