Chessie Henry’s family had their lives shaken from their foundations in the Clarence Valley when Monday’s 7.8 earthquake struck. She shares her story.

Only last week I was laughing with a friend about my weird inclination to somehow title everything I write Going Home. It is a place that runs so deep for me – a place that comes up again and again in my creative work, and has contributed so much to the person I am and want to be. It’s the place I feel most at ease.

Our family home was north of Kaikoura, half-an-hour along State Highway One and then 15 minutes up a white limestone road into Clarence Valley. At the end of the road you’d cross over a large bridge, Clarence River passing underneath you as it winds it’s way through the hills to meet the ocean on the Kaikoura coastline.

The bridge had always been emblematic of what our home means to us – the fact that you have to cross a river to get there somehow adding to our sense of being hidden away. No cellphone reception or close neighbours, no noise in the mornings but birdsong. We could turn the music up as loud as we liked; we could switch off our phones; swim in our river; and at night we could curl up by the fire.

While so much of my sense of identity is based on shared experience and community, an equal part of me has been irrevocably shaped by landscapes. By the ground under my feet. By hills and mountains. By my beautiful Clarence River. By the curve of our driveway as you turn the corner, knowing that home is no longer far away.

Like so many other families, my mum, brother and cousin were stuck with no way for us to reach them, trapped in a horror story version of our beloved home.

When the earthquake hit on early on Monday morning I was in Wellington. I was scared, but I was also tired. I had work in the morning. I went back to sleep. Then I woke up to messages from my friends worried for my family. This was the first I’d heard of the quake being centered near my hometown.

The days that followed have been overwhelming. My dad, Chris, is a GP in Kaikoura, and was on call for the night when the earthquake hit, so he was staying in town. He has since been holed up there, completely consumed by the aftermath. Like so many other families, my mum, brother and cousin were stuck with no way for us to reach them, trapped in a horror story version of our beloved home.

Many of the families affected were completely isolated, unable to talk to anyone or have access to information about what had been going on. In the hours and days that followed the quake, every decision made about what to do, where to sleep – even where to stand during the intense aftershocks – could only be discussed by the few people who happened to be there at the time.  My family in Clarence had no idea where the quake had even been centred, my mother left to helplessly wonder if the situation was actually worse in Wellington or Christchurch. She had children in both places.

Sixteen hours after the first huge shake, Dad was finally able to phone me from Kaikoura. He had been able get to Clarence by diverting a medevac trip on one of the Westpac rescue helicopters, and had been to the house for about five minutes before he had to leave again.

I winced at the thought of Mum seeing him, thinking she would be rescued – only to find that he had to leave, and she would be staying another night in what no doubt felt like a terrifying place to be. Though the line was cutting in and out, I could hear – in snatches – Dad describing what he’d seen. All he could say about seeing Mum was that “everything she loves is broken”.

He also told me that our bridge over the river - the most solid and steadfast thing I can imagine - was completely gone. I asked if he meant cracked, perhaps? Unable to be driven over?

They had no idea when or how they would be rescued, or if the next aftershock would be bigger than the last.

I tried to imagine it, but I couldn’t. My mother had put so much of her energy into building our beautiful, slightly mad, home – always so intent on making it a place that her kids would forever want to come back to. I cried to think of her walking around the wreckage, whole sections of our house ripped away.

Dad told me to fly down to Christchurch on the next plane I could. My three other brothers came to meet me at the airport and on the way to my aunt’s we agreed that the most important thing was that everybody was alive. This already made us infinitely luckier than those that lost their lives in the Christchurch earthquakes, and the two people who died in Kaikoura.

While we waited for news, we knew our family in Clarence would be in survival mode. They had no idea when or how they would be rescued, or if the next aftershock would be bigger than the last. When we were finally able to get a chopper in to get them on Tuesday evening, I was able to speak to them all for the first time.

Mum described the four minutes of terror while the earthquake raged, paralysed on her bed with my cousin while our things smashed down around them. She told us how at night they lay together on the lounge floor, Mum in the middle with my brother Finn and cousin Hebe on either side. She rolled through the aftershocks, unable to sleep because she was so absolutely sure she would have a heart attack.

Finn described our driveway, unable to be walked over unless you were willing to climb. It seemed weirdly fated to all of us that Mum was at home with him and Hebe rather than being alone, as she often is, with my brother Rufus who has Down Syndrome.

I thought of all the times we had driven in through the gate after a long journey – the sky darkening, the kitchen windows lit up in golden squares. The pergola that Finn had built with my father – and which we had excitedly watched our wisteria growing over for years – was now in pieces, some beams of wood now leaning ominously towards the house. We looked at pictures of the river, its course now changed completely, landslides marking the hills like scars. We realised, together, that we will probably never live in Clarence again. 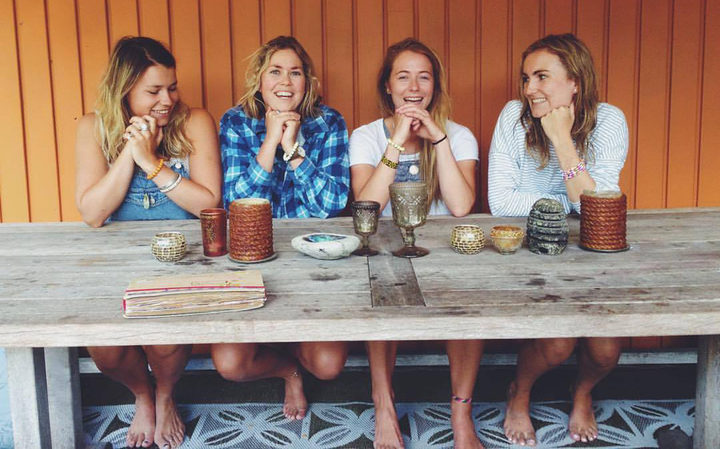 Chessie Henry (far left) with friends in the pergola her brother and father built. Photo: Supplied

The magnitude of what this earthquake means for everyone is still yet to be understood. This is huge for us – for Kaikoura and the surrounding communities. For Clarence. And it’s huge for our nation as well.

It’s hard – with all the events of the last few weeks – not to feel like the world as I know it is completely crumbling down around me. But somehow, something in all this makes me remember exactly what it is to be a New Zealander. I had no idea how much love I really had for the land around me until I saw it, broken, on the news. Until I watched the shaky footage of our river from above, and tried to align those eerie images with the place I had stood last Christmas, drinking beers, ankle-deep in clear blue water. 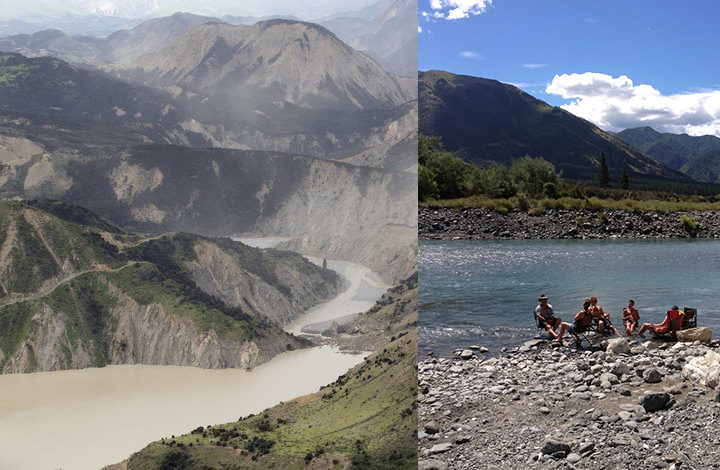 Dust rises from the Clarence River after the earthquake (right) and how it used to look in summer. Photo: AFP and supplied.

These places are so much a part of me that seeing them destroyed makes me know with absolute certainty that some things will not change. In the same way that so much love has risen up out of Christchurch, I want to envelop the whole of Kaikoura and Clarence in my arms; to love these places with more fierceness than I ever did before.

I’m writing this in my aunt’s house in Christchurch, with my family all around me. We all agree that there is nothing more unsettling than the ground moving from under you, literally being torn to pieces at your feet. Because it’s the ground; the earth; the most solid, constant thing.

But we will start again somewhere – and it will be in New Zealand, the land that has sheltered and protected us more than it has ever hurt us. The place we love the most and will always come back to. Our home.