Here are the basics. 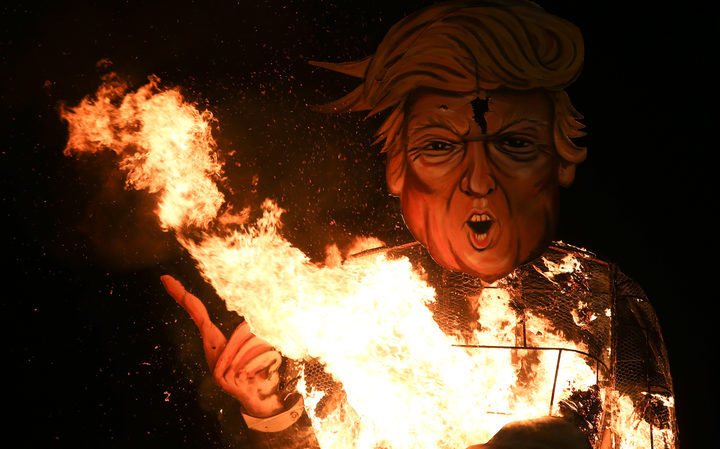 An effigy of Donald Trump is burned by the Edenbridge Bonfire Society in the UK. Photo: AFP

Bitter, vicious and filled with fear of impending fascism - this United States election campaign has been politics at it’s ugliest. Now it’s time for voters of the United States to make a decision.

Ok, so what are the odds on Trump v Clinton?

That depends on who you ask.

Over at polling website Real Clear Politics, Clinton tipped to take 203 Electoral College votes, while Trump has 164 - and there are 171 up for grabs across 15 states. The first candidate to get 270 wins.

Stats analysis website  FiveThirtyEight.com is forecasting a 70 percent chance of Clinton making history his election. Meanwhile, The New York Times is giving her an 84 percent chance based on the latest state and national polls.

But despite those favourable numbers, this could possibly still be close. Trump is the favourite of white voters who don’t have a college education. In recent national surveys, Trump leads Hillary Clinton by 59 percent to 30 percent with those potential voters, according to the The New York Times UpShot blog and that margin is enough to cancel out gains with the Hispanic and educate white voters who are more likely to vote for Clinton.

And for a moment, spare a thought for those who can’t bring themselves to vote.

Trump must be sweating. He can’t handle losers and it looks like he's about to be one.

Trump is anxious, according to an article in The New York Times, and needs constant reassurance from his staff that his campaign is still on track. Everyone knows, of course, that it’s been an absolute shambles. Yet somehow, amongst the waves of racism, sexism, and 20 years of tax avoidance, Trump is still in this thing.

A couple of recent hiccups are likely leaving him a bit panicky, though, including the last minute endorsement by the KKK and reports that a Trump Organisation server was used to communicate with a Russian bank.

In a last ditch attempt to keep anything else from going wrong, Donald Trump's aides have reportedly banned him from using Twitter. That didn’t stop him making one last insulting remark, insinuating that a Latino vote surge has to do with a “rigged system”.

But in typical Trump fashion, he refuses to consider defeat and still thinks he’ll win.

If Obama worked as hard on straightening out our country as he has trying to protect and elect Hillary, we would all be much better off!

What about Clinton? Now that she’s not going to be charged over those emails, she must feel like she’s on the home straight.

Clinton took a hit over the newly discovered emails that were kept on her private server, but will be feeling relieved after FBI boss came out and said there were no grounds for criminal charges.

Is damage already done? Probably, according to Time, who say Hillary's poll numbers sank in many states, and some of her supporters found themselves questioning her honesty. For some, the “Crooked Hillary” tag has stuck.

Beyonce at Clinton rally: "We have to think about the future of our daughters, our sons" https://t.co/xoSXY9JPYK https://t.co/CdEQ8OJOoA

But WHAT IF Trump wins? Would that even matter for New Zealand?

Trump becoming president would be “horrible”, according to the New Zealand Institute of Economic Research (NZIER). The biggest issue would be his attitude to trade with Trump promising higher tariffs and more trade barriers. The US is one of our largest trade partners. We exported $8.4 billion worth of agricultural products like meat, dairy and wine, and tourism to America in 2015.

Trump's policies would also risk reversing many of the global free-trade gains of the past few decades, like the Trans-Pacific Partnership (which might actually be good news to some).

What about if Clinton gets in?

Less horrible. Most agree that Clinton’s economic and trade policies will maintain the status quo.

The Democratic candidate has also rejected the TPP it in its current form, but is more likely to be open to a renegotiation.

What does Obama think of all this?

He’s also continuing to be the topnotch guy he’s been all through his presidency. After a 12-year-old boy in a wheelchair was kicked out of a Trump rally, President Obama took it upon himself to visit him.

Obama will be no doubt be pleased that he’s reached peak popularity, higher than both Clinton and Trump.

Is the end is nigh?

That depends on how clear-cut the election result is - and how litigious Trump is feeling when he wakes up on November 9. He’s said already that he may not respect the result of the election.

“I will look at it at the time,” Trump said a few weeks ago . “I will keep you in suspense.”

He keeps saying the system is rigged, but he also said the Emmy’s were rigged when The Apprentice didn’t win.

If this election gets even more bizarre and there is somehow a draw, then the US House of Representatives votes to decide the winner.

And the world won’t end?

One thing we can be sure about is that the world won’t end because someone was voted President of the United States. That’s at least until they get their tiny hands on those nukes.