When you walk alone for hundreds of kilometres it's OK to talk to yourself.

He found out about the trail from backpackers who would pass his family home in Kerikeri. He asked: “Where are you guys off to?”

Callum began his trek in November last year, the day after his final exam. His dad drove him to Cape Reinga. Then he started walking. 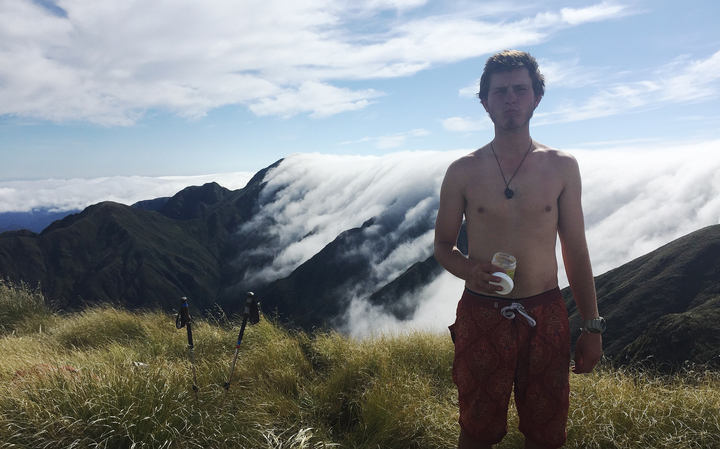 Callum Barnes: "You’re just kind of there. You’re almost like a cow. If you’re thirsty you drink water and get on with life." Photo: Supplied

*As told to Sam Fraser. Story edited for brevity and clarity.

At the very start I did six days without talking to anyone. I walked 90 Mile Beach and did a detour away from the trail. I went on a big mission to the West Coast and then, yeah I didn’t really see anyone.

It was pretty strange. I think most people start talking to themselves. I would be singing and reenacting movie scenes, Scarface usually. You just do it because you can. No one else is around and you’re in the middle of nowhere, so you might as well just go kind of crazy.

After a while, I stopped doing that and felt like I had got to a stage where I stopped thinking, you know? You’re just kind of there. You’re almost like a cow. If you’re thirsty you drink water and get on with life.

You stop thinking about anything that would have ever worried you. You’re just there being happy with whatever you’ve got. You find out a lot about yourself. It’s so relaxing when all there is, is nature. And then really, really little things get you stoked and happy as - like finding some really nice, clean water.

I got myself into a mindset where I was like “I’m going to die before I fail this”, so if I ever got really tired and cold and hated it, I wouldn’t consider giving up. I would just think, “how do I make this situation better?”

I think that really helped because when you start thinking about giving up, it makes life a lot harder.

You could get rained on for ages and you would want it to stop raining. And then the littlest bit of sunshine would come through and you would be in the sun dancing. It just made things that much cooler - the suffering.

I can’t really say there was a terrible day, because the tough ones just made everything that much better.

Definitely letting go of things is the key theme to doing one of these walks. I was carrying things like books and a guitar that I thought I would need because I thought I would be bored. You end up being really happy on other little things.You carry what you need because weight is a big thing. I ended up with one change of clothes and I got used to being pretty dirty. And then food, a tent a sleeping bag. That’s really about it.

And you’ll tell people “I stayed with this person the other night” and you all end up knowing each other. Someone will end up doing something messed up or sleep with someone or something like that and you’ll always hear about it.

When you meet someone, it’s cool because you’re really tired, you’re dirty, you’re hungry and you’re just really raw and terrible. You can’t put on a persona or anything, it’s just you. Instantly, you’re either like “I like this dude” or “I don’t like this dude” .

You just end up yarning for hours about the most pointless shit. l don’t know why. You’re just really tired. You just sort of automatically skip that small talk - “what do you do for a living”… because there comes a time when you are genuinely interested, but when you’re continually talking about life you kind of get sick of it.

Hanging out in the mountains in the South Island was unreal. The trail goes straight through the middle of the Southern Alps. Almost all the way to Southland you’re always up in the mountains or in giant golden valleys. So you’re constantly watching beautiful sunrises and sunsets and hanging out in huts and meeting cool people.

I found the Kiwi hospitality just crazy. People would often make me dinner and let me stay at their house. It blew my mind away, I couldn’t believe it. All the foreigners just go crazy. You get invited into people’s houses and then they just leave and you’re left in their house and they’re like “help yourself to our kitchen, use whatever you want”. And you don’t really - from what I’ve heard - get that in many other places in the world.

It’s incredible how amazing New Zealand is, but, unfortunately, when people get enough money or time to be on holiday, the first thing they do is go overseas, because why not? It’s like, "we’ve got to see the rest of the world". But it’s crazy how beautiful New Zealand is. And it’s right in our backyard, it’s a small place. I mean I can’t compare it to overseas because I haven’t actually done any travelling overseas. But my experiences here were pretty damn incredible.