Street Chant announced last week that they were going on an indefinite hiatus. Ahead of their farewell tour, Emily Edrosa walks us through some of her proudest moments in the band. 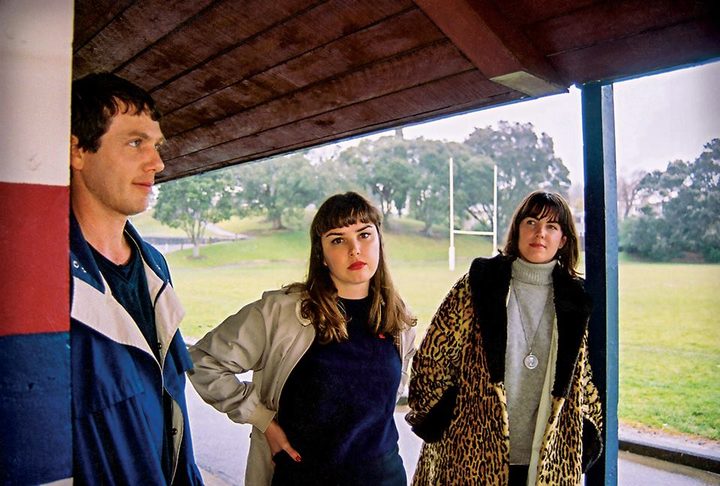 Street Chant is breaking up. Or taking a hiatus at least.

It’s been eight years since we started as Mean Street and even longer since Billie and I started jamming together as teenagers with whoever would drum for us. It seems like a lifetime ago and it’s weird to think I won’t be playing songs with my best friends Billie and Chris anymore, at least not for a really long time.

So many years of hard work, stress and energy have gone into this band and now it feels like the right time to end it in a good place. It’s like when people say it’s not a funeral, it’s a celebration of life.  We have had so much fun showing off in front of whoever would watch us the last few years and I’m still so surprised and happy when people tell us how much our band means to them.

Our final tour starts tonight at the Darkroom in Christchurch and since this country is so damn bad at being arrogant I thought I would put together some of my proudest moments of the little band that could; my baby, Street Chant.

You Do The Math

This is the first recording we ever released. Back then, Mikey Speering was our drummer and we went under the name Mean Street. We were total psychos and used to get into fights with people, show up to shows out of our minds wasted and yell into the mic how all of the disco beat electro rock bands sucked. It didn’t earn us many friends, but it did earn us a few fans.

Djeisan Suskov (now of Leisure) recorded this song in his flat in Mt Eden. He used to actually come and pick up me and Billie (who were always extremely hungover) from our houses and take us to his to record! And we didn’t even pay him! Such little brats.

As you can hear, I hadn’t quite sussed out singing in tune, and we were really into smoking pot and listening to My Bloody Valentine – hence the 20-something guitars. When we started our band, all we wanted was to get on the 95bFM Top 10. I remember sending them this recording (I think it was the first mix, not even mastered – we were so excited!). I went down to the internet café and used the email address of every single person I knew to vote. We got there.

Scream Walk was our first song out as Street Chant and the first song we worked with Bob Frisbee on. I wrote this about all the bands that were doing disco beat electro when we were getting started, and I still like playing it nowadays. Thom Burton made this video for us for cheap. That’s us playing at a party, there’s some cool live footage of that party here.

The song got premiered on Nightline, but we kept getting bumped because of natural disasters. At the end of the third day they played half the video at the end of the show and my mum was stoked.

After our first album came out we were kind of hyped since we beat Naked and Famous to win the Critic’s Choice Prize.  We came back in 2012 and did a “split A side” single and Salad Daze was the longer/weirder song on that. I wrote it in 2011 when I was in Melbourne. I was starting the get a bad taste in my mouth from all the industry showcases we played that year, as well as starting to notice the general poverty around New Zealand.  This song was always such a blast to play live and I love Alex’s drumming on it from beginning to end. Damian Golfinopoulos captured the vibe with the video perfectly. I wanted to put a re-recorded version of this song on Hauora instead of Sink, but was talked out of it.

Isthmus of One Thousand Lovers

Since Hauora was taking so long, I wanted to see if we could do an EP really quick to come out with our merch collab with Arcade.  Isthmus of One Thousand Lovers is the weirdest song on the EP we made. I think we were losing our minds with how long Hauora was taking. Yeezus had just come out and I had just borrowed a keyboard from my friend Brad. I kind of wish more people had heard this EP. Tear My Whole Face Off is a great song too, and I will always be proud of our cover of There Is No Depression In New Zealand.

It’s hard to pick a favourite from Hauora, but I’m real psyched that Pedestrian Support League got in the top 5 for the Silver Scrolls. Melbourne is probably my real favourite, but the video for that is coming out today anyway.  The last song, My Country, is pretty incredible to me still though. We recorded the drums and bass with no idea what the song would end up being like. I turned it into a loop on Pro Tools and made the song on there. To me it’s a pretty great representation of where guitar music could go if people aren’t afraid to use technology. It’s a sad song about loving someone but knowing the relationship will probably end. It’s hopeful though, that it can still be a positive thing. That’s how I see the ending of Street Chant.

Street Chant’s farewell tour begins tonight in Christchurch. Flying Out has everything you need to know.