A Ngati Hine leader has told the Waitangi Tribunal the Crown has opened old wounds - and enmities - in its drive to settle the Ngapuhi claim.

The Waitangi Tribunal is sitting at Tau Henare marae in Pipiwai this week, to hear Ngati Hine grievances, as part of its two-year inquiry into the northern land claims. 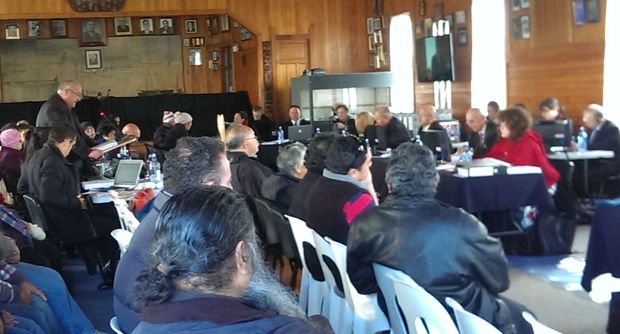 Ngati Hine leader Erima Henare says the descendants of those who were inside the pa have always had a grievance about those on the outside, who fought for the British. Photo: RNZ / Lois Williams

Erima Henare said the people now claiming to represent all Ngapuhi in negotiations with the Crown, were descendants of chiefs who fought on the government side in the northern wars.

He said the Ngati Hine chief Kawiti defied the Crown, and won a number of battles against it before choosing peace.

Mr Henare said the descendants of those who were inside the pa have always had a grievance about those on the outside, who fought for the British.

He said the Crown had revisited that hurt on Ngati Hine by agreeing to deal with Tuhoronuku, the runanga-led body which claims the mandate to represent all Ngapuhi hapu.

Mr Henare told the Tribunal the Crown thwarted Ngati Hine's bid to set up a self-governing province in the 1880's, but its chiefs continued to dispense marae justice right up until the 1960's.

He said in Motatau, the heartland of Ngati Hine territory, no-one saw a police officer until 1964.

Mr Henare said Ngati Hine had its own bank, and the first telephone network in Northland early last century, but the iwi was damaged by land losses and Crown policies that forced people from their rural homes.

The hearing continues at Tau Henare marae, west of Whangarei until Friday and is open to the public.