The scene of a notable Bay of Plenty battle at Gate Pa (Pukehinahina) could become a tourism attraction. 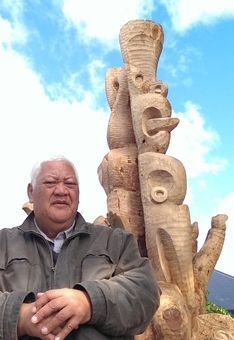 Peri Kohu in front of one of the carved tree stumps. Photo: RNZ / Rosemary Rangitauira

An organiser of the 150th Gate Pa commemoration, Peri Kohu - a board member of Pukehinahina Charitable Trust - wants more people to visit the battlefield in Tauranga - along the main Cameron Road, which leads into the city.

Eight Maori carved posts have been erected there, with two carved tree stumps on top of the Gate Pa/ Pukehinahina hill.

They serve as a reminder of both Maori and Pakeha who fought at the site, and who died there in 1864.

Mr Kohu said he had aspirations to continue expanding upon what's been started and turning it in to a tourist venture.

He said there were examples overseas such as in America, where the battle of Little Big Horn was fought.

Mr Kohu said now that was a well-known venture, which showed re-enactments and shared the history.

While at Pukehinahina, he said it was one of the most significant battles in which many people lost their lives.

Mr Kohu said people who come to Tauranga won't be able to ignore the site.

Although Gate Pa is a reserve, Mr Kohu said the trust had been able to do the work it's done so far because the site comes under his tribe's boundary of Ngai Tamarawaho.