The incentive of an exhibition at the Taranaki International Arts Festival has prompted a Lower Hutt weaver to finish a Maori cloak started by her late mother. 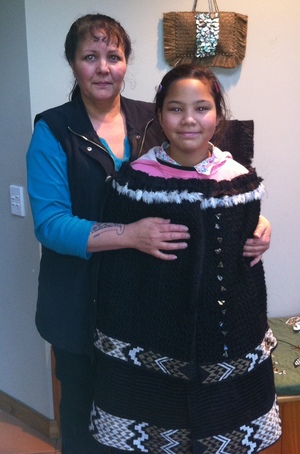 She said her mother wove 13 korowai, or cloaks, for her grandchildren, but fell ill before she could complete one she had started for her youngest mokopuna.

Ms Hetet says that up until recently she found it too emotional to work on the cloak, but the prospect of the exhibition pushed her to finish her mother's work.

She completed it on the anniversary of her mother's death and named it after her mother and her daughter, who is also called Erenora.

Ms Hetet says her connection to Taranaki is through her mother and she wants to learn more about her history while being part of the exhibition, The Call of Taranaki.

Running from 16 August to 17 November it will showcase the work of contemporary Maori artists, all of whom have tribal connections to iwi in the region.