Opinion - Maybe the warning signs about that swimming final were there from the beginning in TVNZ's coverage. 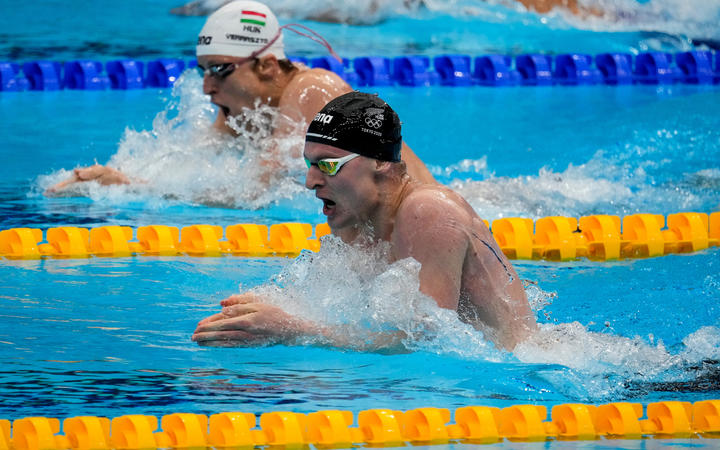 We Olympic amateur watchers love Lewis Clareburt. We have loved him all the way back to yesterday when he blitzed his heat, breaking the national record. We like the way he seems nice. We like his 400m medleys. We like his name, like a 19th Century novelist or an Antarctic explorer. We like how he went to Scot's College with everyone in New Zealand's cousin and they reckon he is cool.

But the signs were there as we tuned in to the preview of Lewis' race, hosted by Toni Street, on TVNZ's Olympic Games Tokyo 2020 coverage.

Mark Bone, TVNZ's swimming expert, solid of name and jaw, had a penchant for worrying artillery metaphors in his predictions when it came to Lewis.

"I think he's got more powder in his gun," he said disquietingly. "And he could deliver it today."

But what about the Australian who was fastest qualifier, demurred Street.

"Has Brendon Smith fired all his bullets," shot back Bone. "I am not sure Lewis has."

Disconcertingly, we moved from weaponry to sex.

What happened to the Japanese star, Seto Daiya, who failed to even make the final, asked Street, sweetly.

"Seto has had a tough time," explained Bone. "He had an extra-marital affair last year.

"I don't think that has gone well for him," he concluded.

We were in deep water now, a long, long way from Clareburt-mania.

"Who is this young man from Wellington," asked Street brightly to steer us back to why we were all here.

"In Swimming New Zealand, they love him. I am really impressed with him."

We have all been, cooed Street.

Don't underestimate our Lewis' serious side, Bone had time to warn us.

"He's at university. He is very, very bright."

There was time for a quick cross to another swimming coach, Mitch Nairn, who looked like a good bloke at a family function. Worryingly, he side-stepped the question of a medal. Whatever happens, he is doing us proud, said Nairn.

Finally, it was time to cross to poolside. There were more bad signs. We saw the swimmers warming up, blank-faced and goggled, but we had the commentary of a table tennis match with China marching towards the semi-final. Watching apparently was the "master mind of Chinese table tennis" who had won gold at Atlanta in 1996.

Atlanta. Was this an omen? Danyon Loader's two golds were in Atlanta. Our last swimming medals were there. Or a dark portent? The spirit of Atlanta was elsewhere, at the table tennis.

Finally, the swimmers emerged, all tall, wearing swimming caps and Covid-19 masks, and looking for all the world like replica Ali Gs. Chase Kalisz, the American sauntered out in shorts. He looked worryingly relaxed.

The Americans can afford to look relaxed. They always seem to win in the pool. They have millions of swimming scholarships. They have university rec centres with hundreds of lanes, the size of airports. They all look like models. But Mark Bone had warned us the Americans could be underdone; Covid-19 had shut many pools, no-one really knows the state of their preparation, he warned. We tried to ignore Chase Kalisz.

"Lewis the new name in New Zealand swimming... can he win a medal here," asked the commentator.

A few moments later we got out answer. Sadly not.

We crossed back to Street in New Zealand.

"Wow, what a race that was. Lewis Clareburt finishing in seventh, doing New Zealand completely proud there," she said.

We went through the race, stage by stage. Kalisz, the American, had been phenomenal. Lewis had led at the halfway but touched at the end in a virtual dead heat with half the field. In amateur Olympics land we were still in shock. Bone seemed to have gone through the seven stages of grief in seconds, Street was taking longer. Oh, gosh, she said, her voice trailing away.

Bone pointed out, reasonably, that our Lewis got a final, he broke a national record, he stood up on the international stage. Did us proud.

Plus, he has got another shot - in the 200m event on Wednesday.