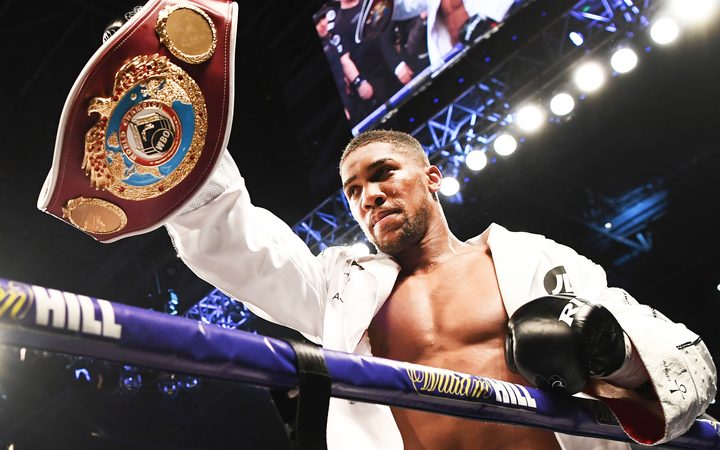 Anthony Joshua holds up the WBO belt that was held by Joseph Parker. Photo: Photosport

He raced in Formula One with Toro Rosso last year and is currently a simulator driver for Alonso's former team Ferrari.

The Colorado Rapids have sacked former All Whites football coach, Englishman Anthony Hudson, as head coach of the Major League Soccer side.

Since taking over the Rapids in 2017, Hudson managed just eight wins, 10 draws and 28 losses in his 46 matches in charge.

Assistant coach Conor Casey has been named interim head coach while the club undertakes a search for Hudson's permanent replacement.

Joshua had been left in the lurch ahead of his United States debut after it emerged a couple of weeks ago that American foe Jarrell Miller had reportedly failed multiple drug tests.

The likes of Luis Ortiz and Michael Hunter had been linked with stepping into the breach, but it is Mexican-American Ruiz who will fill in as a replacement with a month's official notice.

The 29-year-old Ruiz has won 32 of his 33 professional contests, with his only setback a slim majority points defeat to Parker for the WBO title in December 2016.

Irish jump jockey Ruby Walsh, one of the sport's all-time greats, has announced he will retire from competition, the Racing Post reported on Wednesday.

Walsh, 39, announced his decision after his win on Kemboy in the Punchestown Gold Cup.

Walsh is the Cheltenham festival's most successful rider, winning 59 festival races and being crowned top jockey at the leading meeting 11 times.

His Cheltenham triumphs include three Queen Mother Champion Chase wins, with two on Master Minded and the other on Azertyuiop.

Walsh won two Cheltenham Gold Cups on Kauto Star in 2007 and 2009, and shares the record for most wins in the Champion Hurdle with four victories and the Stayers' Hurdle with five wins.

Former Sri Lanka captain Kumar Sangakkara has been named as the first non-British president of Marylebone Cricket Club (MCC) and will take up his one-year post in October.

Sangakkara's nomination was announced by current president, Anthony Wreford, at the MCC annual general meeting at Lord's in London.

He hit 147 in the drawn Test against England in 2014, and 112 in Sri Lanka's one-day international win on the same tour

Gimelstob to leave ATP board

Former tennis player Justin Gimelstob will step down from the ATP board of directors and will not seek re-election after being sentenced following a felony battery charge.

Gimelstob, who won the Australian and French Open mixed doubles titles in 1998, was at one time considered a possible successor to outgoing executive chairman and president of the governing body of men's tennis (ATP) Chris Kermode.

The 42-year-old American was arrested last November for an attack on October 31 in Los Angeles on Randall Kaplan, who is a friend of Gimelstob's ex-wife Cary Sinnott.

Gimelstob pleaded no contest to a felony battery charge in April that was reduced to a misdemeanour.

He was sentenced to three years probation and 60 days of community labour and ordered to complete 52 weeks of anger management instruction.