The niggle has already begun before what is looming as a bitter Supercars season finale after Red Bull Racing described Shane van Gisbergen's post-race park-in of championship rival Scott McLaughlin as "funny". 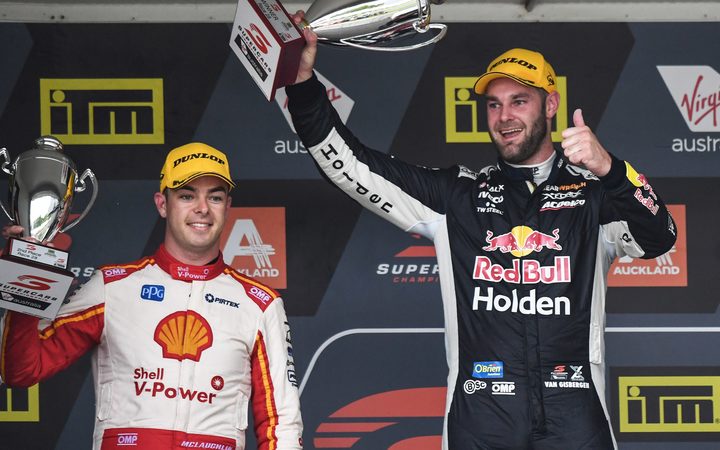 Shane van Gisbergen celebrates winning race one of the 2018 Supercars round at Pukekohe ahead of fellow Kiwi driver Scott McLaughlin. Photo: Andrew Cornaga/Photosport

In one of the closest seasons in history, Ford's series leader McLaughlin is aiming to get the last laugh over fellow New Zealander van Gisbergen at the final round at Newcastle after their rivalry ignited in Auckland last weekend.

DJR Team Penske gun McLaughlin, 25, is aiming for his maiden Supercars title with a 14-point lead and has no shortage of motivation after tangling with van Gisbergen in Pukekohe.

Amid a string of incidents, van Gisbergen appeared to cross the line when he parked so close to McLaughlin's Falcon after beating his rival in Saturday's race that the humiliated series leader couldn't get out of his car as live TV cameras rolled.

Van Gisbergen's team-mate, seven-time champion Jamie Whincup, has called for calm from fans before the season decider later this month, after social media blew up over the incident.

But it seems there will be no love lost between the series rivals after Red Bull Racing found the funny side to the now infamous park-in.

Team manager Mark Dutton said they had warned van Gisbergen over the incident but believed many would not have taken the "error of judgement" too seriously.

"I think some people saw it as funny," he told Supercars.com.

"At the end of the day no one was hurt, there was no cost to it... I think sometimes you need to have a sense of humour.

"We do that to each other in the car park, different teams. Everyone gets on in the paddock so well that those kinds of jokes go on all the time.

"Sometimes, maybe, the timing is better than others."

Dutton insisted van Gisbergen had made an honest mistake.

"If you want to be technical...he parked in the right spot. But you go 'come on mate, you probably could have paid more attention and looked to your left'," Dutton said.

"If you look at the in-car [vision], he's so pumped and so excited at the end of the race that it wouldn't surprise me if he was oblivious to it.

"We like playing the nice guy as much as we can throughout everything."