By Jamie Wall in Tokyo

Opinion - Sitting within earshot of Michael Cheika during a game, you get to hear a full stereo rendition of what it's like to be in charge of a team losing to the All Blacks. 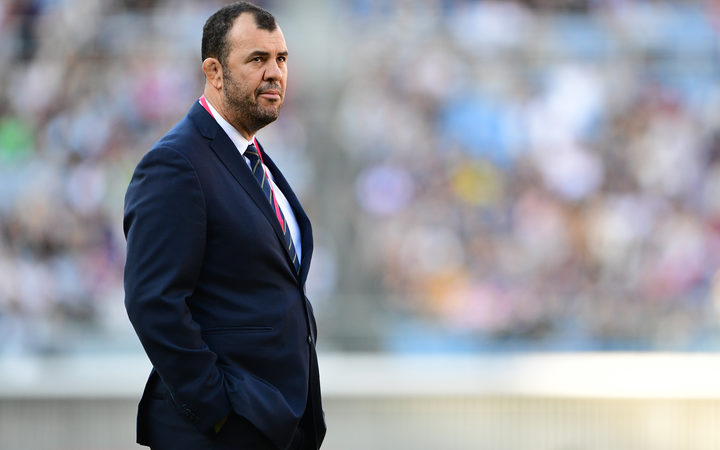 When you sit within earshot of Michael Cheika during a game, you get to hear a lot. Usually, coaches are confined to their own enclosed boxes for the duration of the game.

But at Nissan Stadium for Saturday's third Bledisloe Cup test, the Wallabies staff were set up right next to our media area. The proximity meant we got a full stereo rendition of what it's like to be in charge of a team that is losing to the All Blacks.

It was a beautiful, sunny day in Yokohama, and there were a shade over 44,000 fans in. A knowledgeable crowd who were hitting the notes at the right time, getting to enjoy watching one of rugby's biggest rivalries play out in their own backyard.

Just along from the coaching staff were a collection of familiar faces, just about every New Zealander involved in Japanese rugby were bunched together and stuck out like sore thumbs due to their casual kiwi dress sense among the entirely suited Japanese VIPs.

From the outside, the park that will host next year's World Cup final isn't much to look at given how much effort goes into the aesthetics of stadiums these days.

But on the inside it's a different story, while you are quite a way back from the action due to the athletics track the view is still pretty good and the crowd can make some decent noise.

Beer and food vendors will come and serve you at your seat, and made for an agonizing temptation for those of us working only a few metres away.

The field, despite looking like it might fall to bits as the teams warmed up, held together well enough. Just how it will handle a bunch of rugby games in a row next year will be interesting, however.

Cheika had plenty to say once the game kicked off - mainly about the refereeing, but it was obvious that was brought on the sheer exasperation of a Wallabies side doing themselves no favours.

It was a shame, really, as they'd started off promisingly and almost scored the game's first try.

It would have been good to start the tour with a close, interesting match. But after bit of an arm wrestle of a first half it became clear that the All Blacks would click into business sooner or later.

The signs were there in the first two tries, first Liam Squire went through Kurtley Beale like he was made of balsa wood to dot down.

At least Ned Hanigan managed to hold on to Kieran Read when he crossed from a 5m scrum, but it ended up looking like he was getting a piggyback from the All Black captain rather than trying to tackle him.

Beauden Barrett's second half set piece try effectively settled the game, and also meant Tolu Latu getting himself sent to the sin bin later in the half didn't really have any effect on the outcome.

It was a stupid move to push Codie Taylor in the face, even if it did look from the replay that the All Black hooker kind of deserved it.

The post-match press conference probably needed a stadium itself, given that despite there being around 100 seats some journalists ended up sitting on the floor and lining the walls.

It didn't make for any particularly riveting Steve Hansen and Read soundbites, though - both men knew this was very much a business as usual day for the All Blacks and treated it as such, despite fielding about a dozen essentially identical questions about what they thought of Japan.

However, it was hard not to feel a little bit sorry for Cheika, who came in afterwards.

The Wallabies coach looked like a tired man, out of explanations as to why his team couldn't get anywhere near the All Blacks in 2018.

There was no rage that echoed around the stands during the game, but he did end the press conference by reiterating his passion for the Wallabies and desire to do whatever it takes to make them beat the All Blacks.

Just what that exactly is remains to be seen, though. If there is to be a replay of this match in the World Cup final, like there was in 2015, something needs to start happening fast.

* Jamie 'The Benchwarmer' Wall grew up in Wellington and enjoyed a stunningly mediocre rugby career in which the sole highlight was a seat on the bench for his club premier side. He's enjoyed far more success spouting his viewpoints on the game to anyone we'll care to listen.