The All Blacks have embarked on their end of year tour, first up facing the Wallabies for the third time this season. 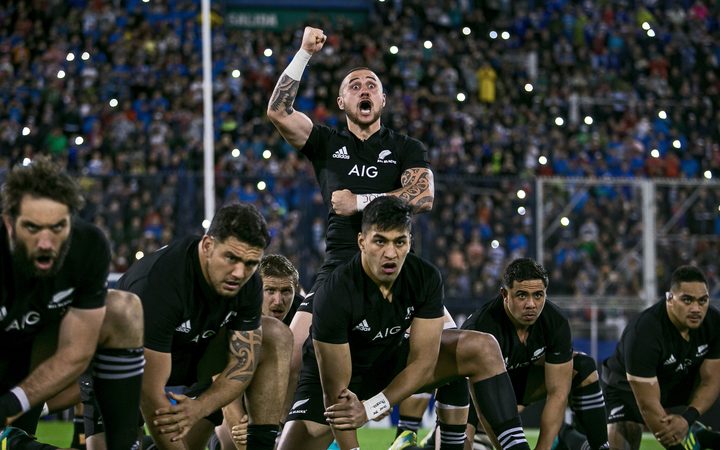 The All Blacks will play the Wallabies at Nissan Stadium in Yokohama. Photo: Photosport

Not at Eden Park in Auckland, or ANZ Stadium in Sydney like the other two tests, mind you. This Saturday they'll stride out onto the turf of Nissan Stadium in Yokohama, the venue for next year's World Cup final.

For those of you planning on attending games there during the tournament, but who might complain about being far away from the action - I have some bad news for you. Nissan Stadium holds around 73,000 in its stands, but the playing field is ringed with an athletics track. The closest seats to the pitch are around 30m away, and the furthest would probably need some binoculars to have any idea of what is going on at the far goal line. However, it is still an impressive venue, in a remarkable setting.

It's autumn here in Tokyo, but the temperature hasn't dropped too significantly. The locals tell me that it's normal for the weather to be mild at this time of year, so it'll be jerseys rather than a jackets in the stands for when the test kicks off at 3pm local time on Saturday afternoon.

But in the wider scheme of things, this game does tie back into probably the most interesting soundbite of the season from the All Blacks. After the second Bledisloe Cup test Steve Hansen set the NZ media on a rare scramble to interpret just what exactly he'd meant, after he remarked that the All Blacks would greatly appreciate government assistance to keep key players in the country.

While Hansen later clarified himself a fortnight later with a far more PR-brushed statement that somewhat flew under the radar, the whole furore did shed a bit of light onto just where NZ Rugby is at in the constant battle to retain control of its greatest resource.

That's why we find ourselves here in Tokyo, listening to press conferences that lean heavily on quotes about growing the game and how exciting it is to be playing in front of All Black fans in Japan. This test, along with the next game against Japan, is the All Blacks' money-making phase of the year. While they haven't played a test in Asia since 2013, money-making offshore matches have become the norm for the All Blacks over the last decade.

It's a testament to their pulling power, more than anything else. No other team in the world can draw the sort of crowds than the All Blacks do - and for evidence of that you don't need to look any further than when others have tried. A year after their historic game at Soldier Field against the USA in 2014, the Wallabies could barely fill a third of the seats at the same stadium. When Wales and the Springboks clashed at RFK Stadium in Washington DC earlier this year, more than half of the park was empty.

This is easy money for the All Blacks too, especially since the game is historically one of the biggest rivalries in rugby. But conversely the third Bledisloe test of the year seldom has anything riding on it these days, and this one is no exception given that the All Blacks have comfortably thumped the Wallabies twice this year. It's unlikely that you'll find too many Kiwi rugby fans upset about this one being played in a neutral venue.

Money aside, this fortnight does serve other purposes for the All Blacks: familiarising themselves with the arena that will serve as the battleground for the World Cup, and winning some support from locals new to the game. The latter 'hearts and minds' campaign is a rare opportunity for the All Blacks to engage a foreign population into actively supporting them during the World Cup, rather than treating them with a mixture of fear and reverence.

A bit of sushi tasting and Samurai training from earlier in the week with @PattyTuipulotu and Dalton Papali'i in Japan ahead of this weekend's third #BledisloeCup match against Australia. #NZLvAUS #TeamAllBlacks pic.twitter.com/VLHs838tas

This is the first time the All Blacks have played at Nissan Stadium. From here they head to Twickenham, Aviva Stadium and Stadio Olimpico, all iconic venues that will be full to the brim. But out of all them on this tour, this is the one that holds the most significance in the long term.