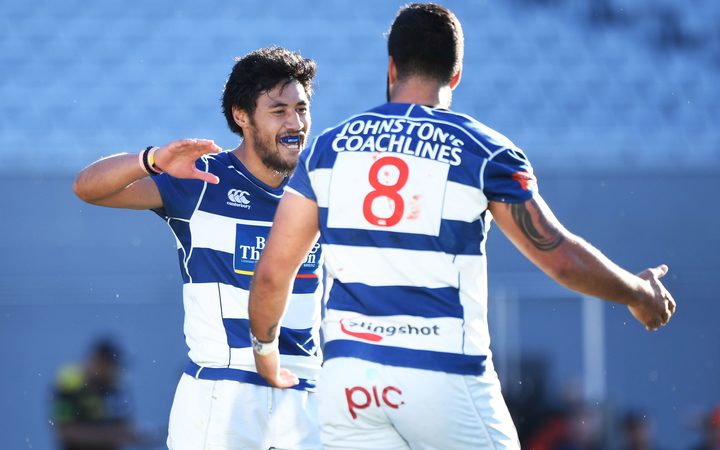 Akira Ioane celebrates a try with Melani Nanai in the semi-final against Wellington. Photo: Photosport

Auckland took the sting out of the Wellington attack early on, and led 24-10 at half-time after a strong start.

They poured on more points in the second half and were far too clinical.

The number eight Akira Ioane scored a couple of tries and was influential throughout.

They'll host defending champs Canterbury in what will be the Cantabrians fourth straight final next Saturday.

And in an unprecedented move, Auckland Rugby and Eden Park have announced they are providing free entry to the game.

Auckland Rugby CEO Jarrod Bear said they thought allowing rugby supporters in Auckland to enjoy such a spectacle without any obstacles, was worthy.

"Our supporters have backed us through thick and thin. This is a chance to celebrate our fans and we're looking forward to enjoying with them an experience to support finals rugby.

"Our relationship with Eden Park has allowed us to continue to strengthen our connection to the Auckland community through this unique opportunity."

Earlier, Waikato beat Northland 48-26 in Hamilton to proceed to the Championship final where they'll meet Otago, who snatched a last gasp 1-point thriller against the Hawke's Bay Magpies in Dunedin.

The winner will be promoted to the Premiership next season.