Australia's batsmen have survived their first examination from ace legspinner Yasir Shah but Pakistan remain in a commanding position in the first Test in Dubai.

At stumps on day two Australia were 30-0, trailing by 452 runs after bowling Pakistan out for 482 late in Monday's final session.

New-look opening duo Usman Khawaja (17 not out) and Aaron Finch (13 not out) faced 13 overs with Test debutant Finch surviving a big appeal for lbw from Yasir's second delivery.

Replays showed the ball would have clipped leg stump but the umpire's call would not have been overturned, meaning a Pakistan review would have been fruitless.

Yasir looms as a major weapon for Pakistan with the pitch already showing signs it will deteriorate late in the match. 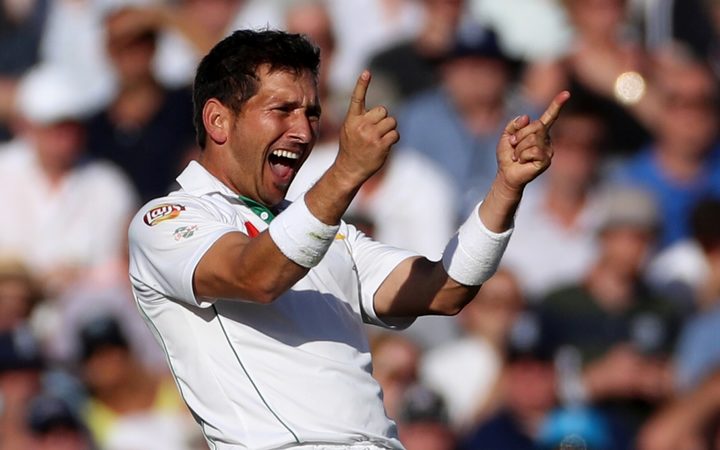 Australia have only won on three occasions in Test cricket after conceding at least 482 runs in the first innings.

Debutant Marnus Labuschagne earlier demonstrated his value as a triple-threat, inspiring the visitors with the ball and in the field.

The part-time legspinner struck minutes before tea, removing Asad Shafiq (80) with a ripping delivery which caught the right-hander's edge.

Labuschagne then had Babar Azam (four) run out shortly after tea with a pinpoint throw from midwicket which left Babar well short of his crease.

Haris Sohail (110) - one of two Pakistan century-makers along with Mohammad Hafeez (126) - soon followed, caught behind while attempting to cut a Nathan Lyon delivery.

It was a welcome change of fortunes for Lyon after he was earlier foiled by the DRS.

Sohail was on 51 when he advanced down the crease and padded away a Lyon delivery, prompting an appeal which umpire Richard Illingworth dismissed.

Paine called for a review and replays showed the ball was projected to hit the wicket but the umpire's call could not be overturned because Sohail was too far down the pitch.

Lyon finished with figures of 2-114 after toiling for 52 overs in the punishing heat.

Recalled veteran Peter Siddle was the pick of Australia's bowlers, claiming 3-58 to overtake Merv Hughes as Victoria's most prolific Test paceman and become the ninth-most successful Australian quick with 213 dismissals.