The Pumas scrum has gone from a talismanic strength to their Achilles heel, much to the chagrin of coach Mario Ledesma.

The former Wallabies forwards coach will bring quiet confidence but a lack of faith in his scrum across the Tasman following Argentina's 46-24 loss to the All Blacks in Nelson.

Saturday's Rugby Championship Test against Australia on the Gold Coast will be Ledesma's first against his former team since taking charge of the ninth-ranked Pumas from Daniel Hourcade six weeks ago.

He is perturbed by a slide in Argentine scrummaging standards, once considered the rock their game was built around. 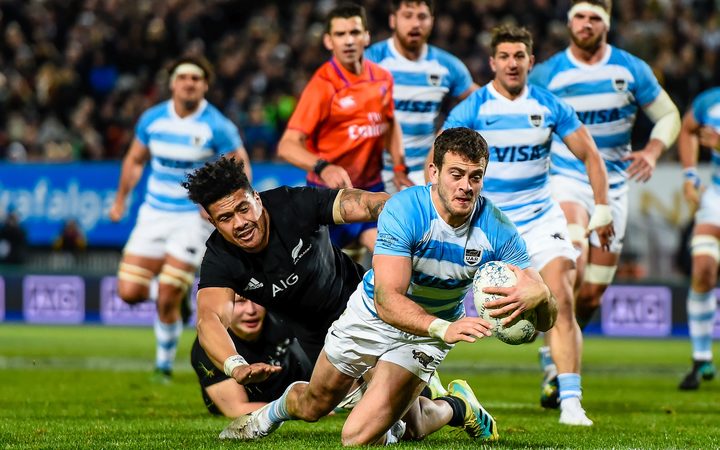 Emiliano Boffelli of Argentina scores against the All Blacks in Nelson. Photo: Photosport

Rookie All Blacks prop Karl Tu'inukuafe twisted and shoved the visiting pack for much of Saturday's Test, depriving Argentina the sort of platform their classy back division can thrive on.

"We got torn apart so we need to get better there," Ledesma said.

"It's been the same for the last couple of years. Unfortunately other teams go hard at us there because they consider we're really strong."

Former hooker Ledesma isn't new to scrum overhauls, having been credited with rebuilding Australia's set piece under Michael Cheika from 2015-17.

Ledesma was otherwise delighted by how often his back division, orchestrated by five-eighth Nicolas Sanchez, were able to breach New Zealand's defence.

There is a belief they can end a miserable run of results against the Wallabies, having lost 15 of their last 16 Tests, every Test on Australian soil since 1983.

"Why not? Even though we lost by 20 points, I think there's a lot of positives from this game."

Veteran All Blacks lock Sam Whitelock warned the Wallabies to brace for the panache and footwork, of the South Americans.

"They've got some guys that can light up pretty quickly," he said.

"They're really good on their feet and a couple of times from counter-attack they really cut us open.

"That's a real strength of their game and no doubt they'll be trying to build on that against the Wallabies."