The US singer panned for butchering the New Zealand national anthem before the Kiwis' game in Denver has apologised for the "debacle". 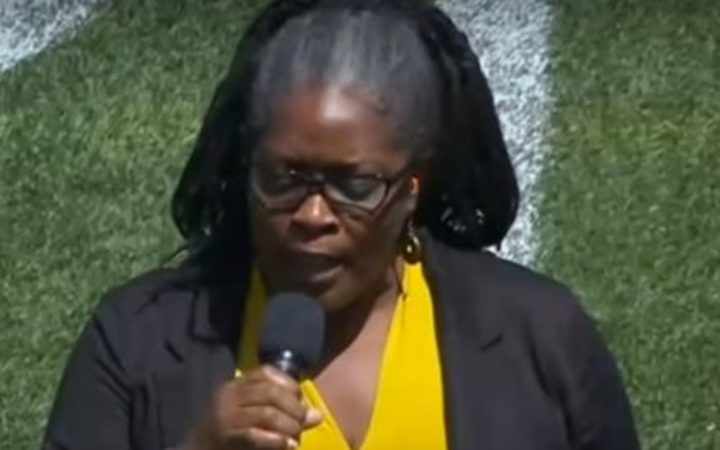 Crystal Collins singing the national anthems at the Kiwis vs England game in Denver on the weekend. Photo: Screenshot / 1News

Singer Crystal Collins sang the anthems at the Kiwis vs England rugby league game in Denver on the weekend, and her rendition was roundly panned.

Rugby League chief executive Greg Peters told Checkpoint with John Campbell yesterday he was "shocked and appalled" by her performance.

Video of her singing shows Kiwis players looking perplexed and annoyed, and trying to sing along with the correct timing.

Promoters told Mr Peters that Collins had rehearsed it perfectly in the changing room beforehand, but lost it when she was on the field.

Collins spoke to Radio Sport and said she apologised to "all the citizens of New Zealand for that debacle".

She said she had sung the England national anthem a capella (without instrumental accompaniment) , and had then gone straight into New Zealand's and there had been no test of her monitor - which she was unable to hear.

"I could hear nothing, nothing at all."

She told Radio Sport she had been practising with a track provided by the Ministry for Culture and Heritage which had a short introduction.

Collins said she had had a conversation with the sponsor about using a version that included the introduction, but the backing track on the day did not have one.

"I felt horrible, I really did."

She then performed a te reo Māori version of the anthem live on Radio Sport and nailed it.

"I am so sorry that is not how it came out on Saturday," she said.