South Africa have scrapped a ban on picking overseas-based players, opening the way for new coach Rassie Erasmus to name a full-strength side to play England in their three test series next month.

Governing body, SA Rugby, ended the overseas-based player policy just over a year after bringing it into effect.

The rule prevented the Springboks from selecting overseas-based players who had fewer than 30 test caps.

The measure was an attempt to stem a growing tide of players leaving South Africa to sign more lucrative contracts at clubs in Britain, France, Ireland and Japan.

It was set to be lifted next year in preparation for the 2019 World Cup.

"Rassie is in his last year of preparation before the World Cup, so he can select any overseas-based player," SA Rugby president Mark Alexander told reporters.

"He has just 18 tests in which to prepare for the World Cup, so we gave him grace.

"Rassie has already spoken to a few players who are playing overseas. From now until the World Cup, he wants to give as many players as possible the chance to show what they can do for the Boks."

It was not immediately clear if the ban on overseas players was being scrapped permanently or just until the end of the next World Cup. 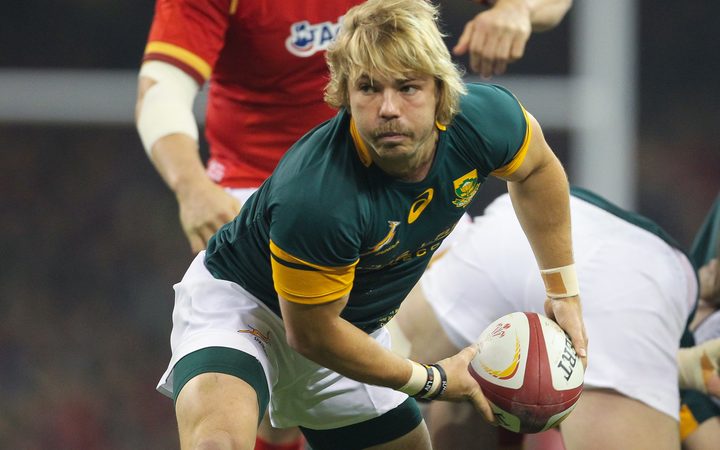 Halfback Faf de Klerk is expected to be one of the first players new coach Rassie Erasmus will rush back into the Springboks. Photo: Photssport

Erasmus is likely to grab the opportunity and bring back scrumhalf Faf de Klerk, considered among the outstanding performers in this season English Premiership.

De Klerk had won 11 caps before he left the Lions to play for the Sale Sharks.

The decision also offers Saracens prop Vincent Koch and Wasps' Juan de Jongh a chance to get back into the Springbok squad.

Erasmus's first test in charge is against Wales in Washington DC on June 2, a week before South Africa's first clash against England.

The new coach has just over a year to prepare for the next World Cup in Japan, where the Springboks play the defending champions New Zealand in their opening game in Yokohama on September 21st.

A talent drought continues to be a major concern for South African rugby.

The weakness of the South African rand means local teams cannot compete with offers from other top leagues with the Free State Cheetahs, who have just completed their maiden season in the PRO-14, set to lose 11 players to overseas clubs.