New Zealand's Scott McLaughlin is building an emphatic lead in the Supercars championship after securing a third consecutive race victory. 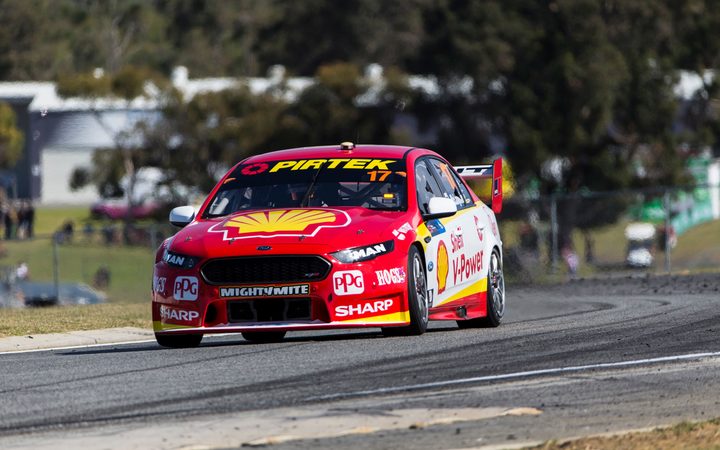 The Shell V-Power ace had pole for the first race of the Perth Supersprint on Saturday and the Ford driver was never threatened during the 50-lap affair.

He was more than five seconds in front of Tickford Racing's Mark Winterbottom, who ensured Fords had the first two spots.

It was 36-year-old Winterbottom's first podium for the season to show he is far from a spent force.

New Zealand's Shane van Gisbergen restored some parity for Holden, forcing his way into third and up to second in the overall standings - 119 points behind McLaughlin.

The result for McLaughlin backed up a pair of victories at the Phillip Island 500 two weeks ago, meaning he has won four of the 11 races so far this season.

"I got a good start which is what I wanted and trucked on," McLaughlin said.

"Three in a row now which is nice and it's great for our championship.

"I was a bit worried there. When I came out of the pit stop there were lapped cars and they were battling, as they are entitled to. It got a bit hairy at one stage."

The 24-year-old's 20th career win came as many of his rivals for the championship struggled at Barbagallo Raceway.

Brad Jones Racing's Tim Slade was fourth in his Holden, while young gun Cameron Waters finished sixth after starting in second on the grid.

But it was another disastrous outing for seven-time champion Jamie Whincup.

The Red Bull Holden veteran received a five-second penalty after nudging Chaz Mostert on lap 33 that caused the Ford driver to spin out when he was pushing for a podium.

Whincup had made up significant ground after beginning the race in 14th position on the grid - his worst qualifying performance in three years.

The penalty dropped the 35-year-old to 11th, putting another dent in his championship ambitions as he remains in fifth and 220 points in arrears of McLaughlin.

Erebus Motorsport's David Reynolds had a forgettable race, finishing way back in 17th after heading to Western Australia only 60 points behind McLaughlin in the championship.